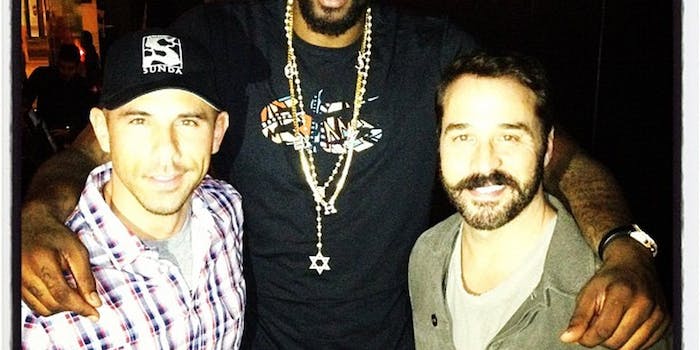 Amar’e Stoudemire apologized for a private message he sent to a fan on Twitter, but not before a screengrab of his alleged gay slur was picked up by national sports outlets.

NBA players know that their tweets are public and therefore subject to the league’s strict stance on their speech. Patrick Patterson coughed up $25,000 for posting a complaint about refs while J.R. Smith was fined $25,000 after tweeting a picture of his girlfriend’s rear end.

But New York Knicks star Amar’e Stoudemire learned the hard way that the NBA’s rules apply to private message on Twitter was well.

Stoudemire received barely legible criticism from a fan Saturday: “you better come back a lot stronger and quicker to make up for this past season mannnnnn deadasss!!!”

In response, the former All Star allegedly wrote in a direct message, “Fuck you. I don’t have to do any thing, fag.” The recipient, @BFerrelli, promptly made a screengrab of the slur and posted it to his Twitter account.

Stoudemire apologized the next day with another DM, saying “Sorry Bro!! No excuses. Won’t happen again,” but it was too late. Sports blogs had already widely publicized the DM, and the NBA hit Stoudemire with a massive fine.

In a terse official statement released Tuesday afternoon, the league said Stoudemire had “been fined $50,000 for using offensive and derogatory language in a Twitter message.”

While it’s difficult to prove a DM—being private, one has to rely on screenshots for verification, and those are easy to forge—the league had no doubt Stoudemire sent the message.

The NBA has a long history of not only policing tweets, but cracking down especially on gay slurs. In 2011, the league fined superstar Kobe Bryant $100,000 for calling a ref a “fucking faggot.”

As if to underscore the sort of vitriol he has to regularly deal with, Stoudemire retweeted a particularly brutal hater on Sunday.

“Fuck you! You are the pussy ass nigger faggot! Somebody needs to fucking lynch your nigger ass and cut off your nigger head,” wrote @JohnDavidson772, an account apparently created just to harass Stoudemire.

Stoudemire otherwise has yet to address the fine or DMs. However, an account devoted to parodying Stoudemire, had this to say about the league’s response: “Grant Hill is pleased.”