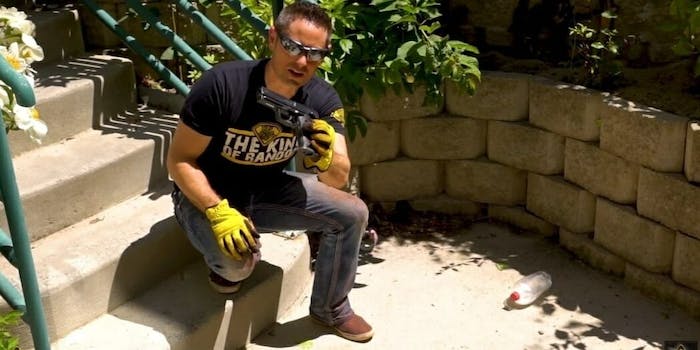 He's agreed to be a more considerate neighbor.

The YouTube star who calls himself the King of Random and who runs a hugely popular science experiment channel has agreed to a plea deal with Utah prosecutors after he was charged with two felonies.

Grant Thompson, 37, was charged with two counts of felony possession of an explosive device after one of his experiments injured a friend last year. But Thompson last week agreed to a deal that he would make two safety videos, and if he stays on good behavior for the next 18 months, his record will be cleared, according to the Associated Press.

Thompson, who has 9.3 million subscribers, came into contact with South Jordan, Utah, police last June after neighbors complained about loud explosions coming from his house. Thompson filmed himself exploding dry ice bombs in his backyard and posted them to YouTube, and in one of his videos, one commenter wrote, “I bet your neighbors love you.”

Last August, police returned to his home after another complaint of an explosion, and he and a friend were eventually arrested. The friend, 20-year-old Timothy Burgess, had been injured when the two caused an explosion that sent “small flaming particles into the air” and some of those particles landed on Burgess’ leg and arm.

“It wasn’t my experiment, and I wasn’t actually involved at all. That’s why the charges were dismissed,” Thompson told the Daily Dot via email.

After the felony charges were filed, Thompson told the Salt Lake Tribune, “It makes it seem like I am an irresponsible YouTuber who is blowing stuff up.”

Those felony charges, though, were downgraded to misdemeanors as part of the plea deal.

“We always believed that the initial felony charges were a mistake,” Thompson’s lawyer, Steve Burton, told the AP. “We felt like this agreement supported that belief.”

Included in the plea deal is Thompson’s agreement not to conduct experiments that will create “exceptionally loud noises,” and one of his new videos must mention the importance of being courteous to the people who live around you. According to the agreement, Thompson must also obtain permission before taking part in an experiment that could cause a fire or an explosion.

One of his fans, though, hasn’t gotten the message.