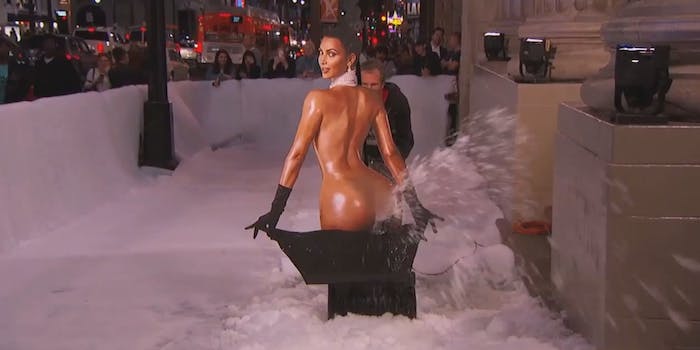 Jimmy Kimmel made snow fly out of Kim Kardashian’s butt

Kim Kardashian's rear end is about to ruin your holiday.

If Kim Kardashian’s oiled-up rear end already ruined free office coffee for you last week, you may not like where this is headed—especially if you’re already sick of the snow. As Jimmy Kimmel has proven time and again, nothing is sacred, not even the holiday season—and to prove it, his Thursday-night segment involved Kim Kardashian violently pooping out white slush.

Kimmel had his crew set up the Kim Kardashian Model Snowblower™—a regular old snowblower with Kardashian’s now infamous Paper magazine cover blown up and affixed to it—on Hollywood Boulevard, along with a whole bunch of fake snow.

Ostensibly unplanned technical difficulties abounded, which led to the incredibly awkward moment of Jimmy Kimmel Live crew members forced to scoop handfuls of the snow out of Snowblower Kim’s insides.

They eventually did get the machine working, and Hollywood locals were treated to a sight they never thought they’d get to see: falling snow. (They also got to see a life-size version of Kardashian’s ample assets, but that’s nothing special, really.)

Puerile? Sure. But either way, here’s Kim Kardashian pooping out a whole lot of fake snow.