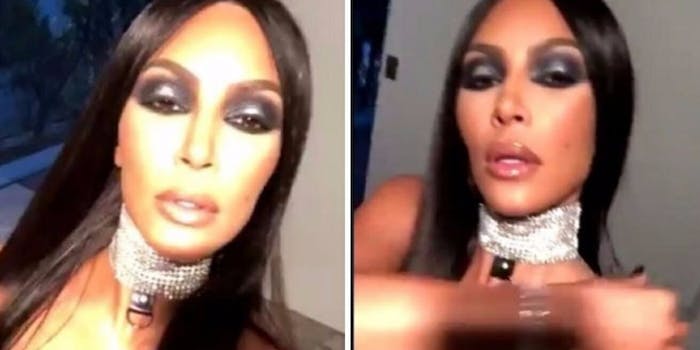 Is this cultural appropriation or just a fun Halloween costume?

Kim Kardashian West had a busy pre-Halloween weekend, paying homage to Cher and then showing off a striking Madonna costume. But she evoked plenty of controversy on Saturday night when she tweeted herself dressed up like Aaliyah.

People were pissed that Kardashian West—who was accused last summer of using blackface to help promote a new beauty line—dressed up like the legendary R&B singer who died in 2001 at the age of 22.

Because when anyone else dresses as a diff culture than their own it's considered racist and cultural appropriation.

You really should run these decisions by somebody first. pic.twitter.com/TwenxNR6Nm

Please tell me Kim Kardashian did not dress as Aaliyah for Halloween… pic.twitter.com/rMFIAlN5a4

Kardashian West explained on Twitter that she was honoring some of her favorite musical legends.

My Halloween theme this year is ICONS! Musical legends!!! Paying homage to some of my faves!

Kardashian West also had her defenders.

My GOD, this is not offensive. She dressing as Aaliyah. She looks great!

She dressed up as a musical artist no black face nothing offensive. Y’all love to hate and reach for nothing stop it. It’s Halloween. pic.twitter.com/4uCnOpu65U

Whether you agree it’s appropriate for Kardashian West to dress like Aaliyah, there’s one undeniable truth at play here: No matter what Kardashian West does, half the people will love her for it and the other half will hate her.