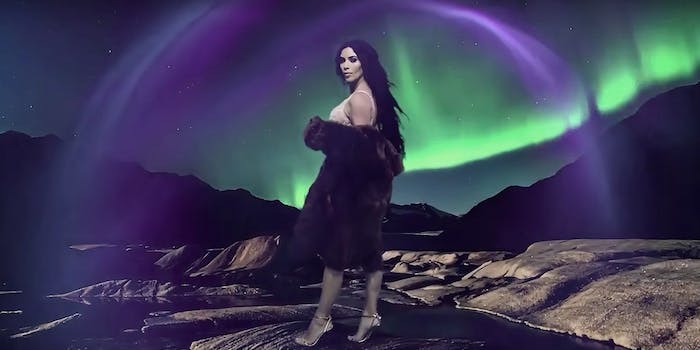 Kim K, is that really you?!

On the 12th day of Christmas, we got 12 drummers drumming  Kim Kardashian back from the social-media dead with a bang (and some sexy lingerie).

After a three-month hiatus following her Paris robbery, the reality-TV queen posed for Love magazine’s Advent calendar in a racy, futuristic video.

The James Lima-directed advert features Kardashian rocking a fur jacket and some white lingerie, effortlessly sporting her oh-so-familiar signature poses against a green, mountain-filled backdrop. The video ends with the message, “peace on earth,” after she drifts away into the darkness while holding some serious eye contact with the camera.

Christmas is getting closer, and it seems that so is Kim K’s official return to the world of social media. Or so we’re hoping.