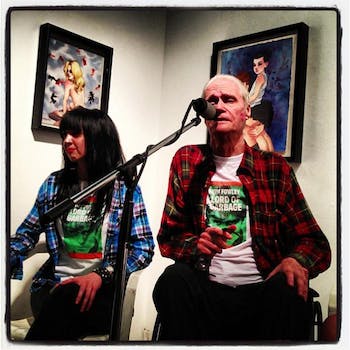 It was a wild ride.

On Thursday, Kim Fowley, legendary musician, producer, and manager of ’70s rock band the Runaways passed away after a battle with cancer. He was 75.

Fowley is perhaps best known as the man who put together the Runaways— which included a 15-year-old Joan Jett—in the ’70s. Their biggest hit, 1976’s “Cherry Bomb,” has been covered countless times since its release. A movie about the band, featuring Kristen Stewart and Dakota Fanning, came out in 2010, and Michael Shannon‘s over-the-top portrayal doesn’t shy away from Fowley’s creepier behavior. The group split with Fowley in 1977. A few months ago, band member Cherie Currie posted to Facebook:

Life is ironic. Kim Fowley was moved into my home a week ago Friday. I have been a 24/7 caregiver for him. Funny, I have not been a fan of this man for decades but time is the great equalizer. It has been an honor to be there for him. He is ill so please send prayers to him. He is as brilliant now as he has ever been. Caring for him keeps me from FB. Know I love you all and please send positive thoughts his way.

Fowley was more than just a Sunset Strip hustler. He also produced songs for Alice Cooper, Kiss, and Gene Vincent, and released his own music. 1968’s “Animal Man” is an excellent intro to his, uh, aesthetic.

His 1977 appearance on Tom Snyder’s Tomorrow Show is essential viewing.

RIP Kim Fowley. He once tried to throw me out of a party while threatening me with a plastic comb. It was the first and last time we met.

One of the more remarkable things about Kim Fowley: no matter how improbable or insane his anecdotes sounded, the facts always checked out.

In this clip from 2013, he addressed his battle with cancer in the most Fowley-esque way possible.