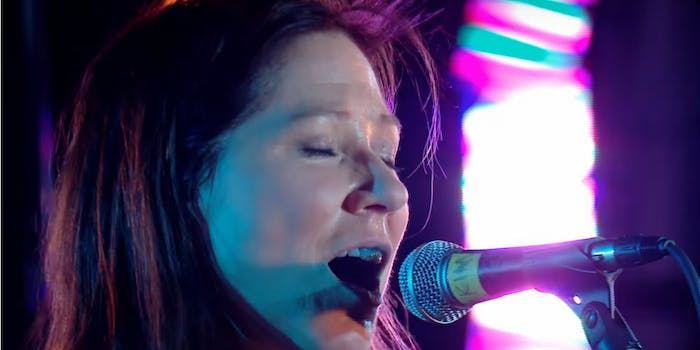 Kim Deal is all nerve.

Steve Albini told a crowd on Wednesday that Kim Deal is “how I ended up here, a place I swore I would never go.”

Albini, the revered Chicago recording engineer and musician, was most likely talking about South by Southwest, in Austin, Texas, where he and Deal—bassist for Pixies and guitarist for the Breeders—spoke about their careers, studio mishaps, and Deal’s love of true crime.

Deal and Albini have known each other for 30 years, so their conversation was relaxed and familial. In fact, it started with a heartbreaking story about Deal’s mother’s birth in West Virginia; she was left in a box on someone’s doorstep covered in sores, by a mother who couldn’t take care of her. The opening lyrics to Title TK’s “Little Fury” reference the holler where her mom grew up.

Deal touched on how she met Pixies’ Black Francis and Joey Santiago in Boston through a wanted ad, which was looking for a specific mix: “high harmony, Peter, Paul & Mary, Hüsker Dü, no chops.” She wasn’t even particularly interested in being in a band, but she thought it might be cool to hang out.

Deal put emphasis on her just being the “bass player, man,” after stating that people told her she needed to have “more confidence” and didn’t really touch on the rumored friction between her and Black Francis. She didn’t leave the band; he went solo.

And then it was on to the Breeders, which originally included Tanya Donelly of Throwing Muses and Belly. After the meteoric success of 1993’s Last Splash and a chaotic tour, that lineup dissolved. Drummer Jim MacPherson just packed up his drums from her basement one day, and Deal didn’t know why for close to 20 years.

Albini related a story about how before Title TK was released, Deal left him a message telling him she had jammed with the L.A. punk band Fear, and that they might be her backing band now. That lineup became the Title TK band.

The conversation veered from music towards the end, as Albini asked Deal to elaborate on her true-crime obsession, which is hinted at on All Nerve‘s “Walking With a Killer.” She and Albini’s wife, Heather, recently went to the annual CrimeCon: “It’s like a western. There’s justice. There was a wrong and there needs to be justice.”