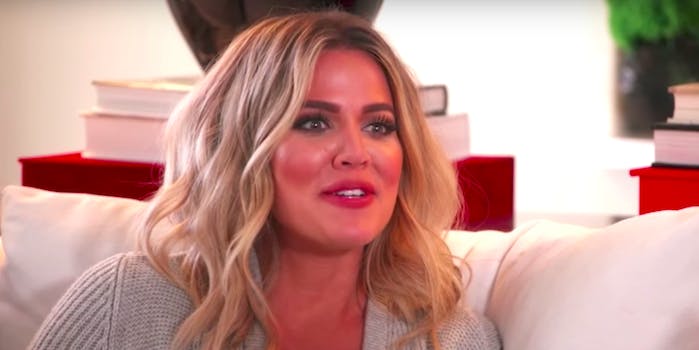 Khloe Kardashian is reportedly pregnant, too

What's in that Calabasas water?

According to TMZ, the Keeping Up With the Kardashians star is three months along with her first child. Boyfriend of almost one year, Cleveland Cavaliers forward Tristan Thompson, is reported to be the father. They’ve been dating for nearly a year.

While any Kardashian pregnancy would have the internet completely #shook, it’s safe to say fans are absolutely losing it now that Kylie, Kim, and Khloe will all have children in the coming year.

This isn’t the first time baby news has surrounded the couple.  Khloe posted a now-deleted photo of the two together from her birthday, captioning it: “Dad + Mom.” Though many were quick to refute the baby news as a rumor,  it now has us thinking if another post of her’s from June could have been eluding to something more.

Neither Kylie nor Khloe have officially confirmed their pregnancies, however Khloe talked about having kids with Tristan on last season’s KUWTK.

“He wants to have about five or six kids with me and that’s lovely,” she said. “We could start at one and we could grow from there.”

The 14th season of KUTWK premieres Sunday. It’s safe to say there may be many more surprises from the family before it airs live.