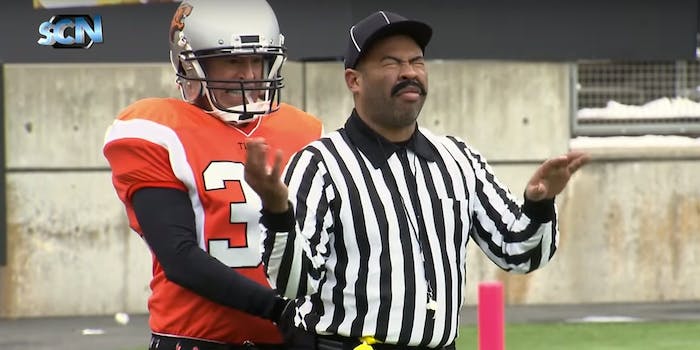 HIngle McCringleberry's celebrations have only gotten more out of control.

Keegan Michael Key and Jordan Peele, fresh off a primetime improvisation of Super Bowl commentary that couldn’t legally mention any part of the Super Bowl Sunday night, went full Key & Peele as they brought back a beloved sketch to The Late Show.

In 2013, Key and Peele made fun of the NFL’s excessive flag usage for players’ post-touchdown celebrations with a sketch starring a football player who celebrates with too many pelvic thrusts and a flag-happy referee who will penalize him if he goes over the allotted number of pumps. With a little help from Stephen Colbert, Hingle McCringleberry and that referee returned for even more shenanigans.

Even if Key and Peele played it safe by using the exact same punchline as the original, it would’ve gotten laughs, and they started with a familiar penalty. But with Colbert’s Kimble Mathias on hand to take the celebration to the next level, the sketch only gets even more ridiculous. It’s a team effort to finally get the referee on their side.

While there were no pump celebrations at the Super Bowl, it has become an actual celebration move by NFL players. Saints wide receiver Lance Moore used it in 2013, and Broncos cornerback and Super Bowl 50 MVP Von Miller celebrated with a couple of pumps after sacking Chiefs quarterback Alex Smith earlier this season. Miller was fined for it, leading Key and Peele to donate the amount of the fine to Miller’s charity.