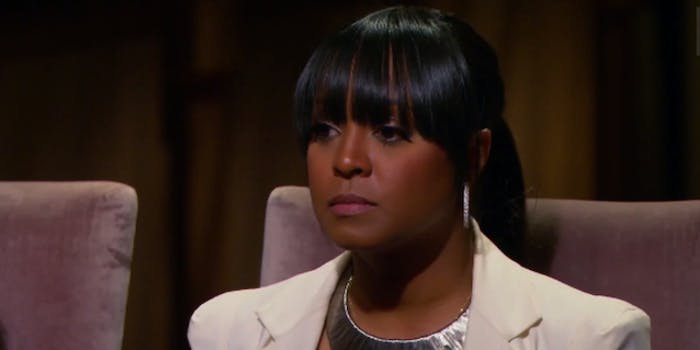 Celebrity Apprentice is apparently still on TV, and former Cosby Show star Keshia Knight Pulliam, who played Rudy Huxtable on the series, is one of the contestants this season. Last night’s season premiere, well, it got awkward.

Though the show was filmed before the landslide of rape and abuse allegations against Bill Cosby, the way last night’s segment was framed is being criticized as exploitative. Pulliam, as team leader, was told she and her teammates had to raise money for a bake sale by calling wealthy friends who could donate.

Naturally, it was suggested she call Cosby. Pulliam didn’t want to, and when she was brought before the boardroom to address her team’s shortfall in fundraising, she was harangued by host Donald Trump for not using her connections to call Cosby and get a slam-dunk check. Trump called him a “tremendous guy with a tremendous amount of money,” and Piers Morgan agreed that he has a lot of money and why wouldn’t she want to get that money?

Pulliam, visibly upset, said, “I have not talked to Bill Cosby on the phone in I don’t know how long,” and added that calling him now is not her place.

That three-minute scene is especially awful because it places the blame on Pulliam for not doing something she’s clearly uncomfortable with. I lost count of how many times Cosby’s wealth was referenced, but at no point did the network reference or account for the recent Cosby news. Then again, this is a show helmed by a human garbage dump.

Speaking of Trump, he of course had something to say about the criticisms on Twitter.

This show was taped just before the terrible Bill Cosby revelations came to light.She still should have asked him for money-goes to charity.

Pulliam was eventually fired, specifically for not calling Cosby for money, and was criticized as a weak leader by Kate Gosselin, no less.

For her part, Pulliam took to the Today Show this morning to address the “no risk, no reward” strategy of her appearance on The Apprentice, citing part of the story lost to the cutting-room floor and dispelling the widespread belief “that we’re this family that has dinner every Friday night.” She said she thought calling Cosby would have been “tactless, very rude.” Later, she also defended her former TV dad, saying she can’t speak to the recent allegations but that “ultimately, they’re just that—allegations.”

Still, in light of the recent headlines involving Cosby, blaming a woman in front of a national audience for doing something she’s uncomfortable with seems pretty irresponsible. But that likely doesn’t matter to the show’s producers if the clip’s going viral.

Maybe someone should fire Donald Trump next.