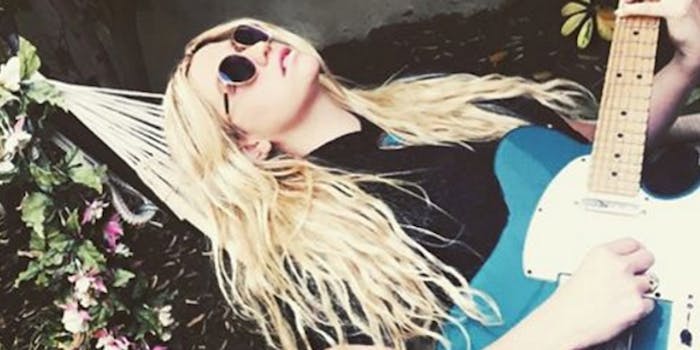 And it's picking up steam.

A New York judge may have denied Kesha’s request to circumvent the terms of her recording contract last week, but the setback has only ignited her fans’ creativity for ways of showing support.

The pop singer and songwriter’s career has been in limbo since she accused longtime collaborator Lukasz Gottwald (aka Dr. Luke) with sexual assault and battery and he fired back with a countersuit. Sony, the label both of them have been working under, has remained silent on the issue, leaving Kesha’s ability to record or release any new music in limbo.

Last week’s denied injunction ruled out one of the few solutions that might have allowed her to work without having to collaborate with her alleged abuser, and now fans are hoping to buy back Kesha’s creative freedom.

A GoFundMe campaign, started by Brandon de la Cruz, is aiming to raise the $2 million remaining on Kesha’s Sony contract and hopefully liberate the singer from the fraught business relationship.

“I thought, if the courts won’t help her, who can?” de la Cruz explains in the description. “We can. If we can collect enough support to show Sony we’re serious, there’s a chance that we could get Kesha released from her contract with them.”

De la Cruz promises 100 percent of the proceeds will be donated to Kesha directly, whether the enormous goal is met or not.

thank you for all the support in my legal case animals. i love all of you. it's meant the world to me. xoxo pic.twitter.com/arHNPSxFs8

Considering the campaign has raised over $16,000 in three days and the $250,000 Taylor Swift donated separately, Kesha may be a good chunk of her way toward buying her way out of her contract. The Daily Dot has reached out to a lawyer about the feasibility of de la Cruz’s plan and will update if we hear back.