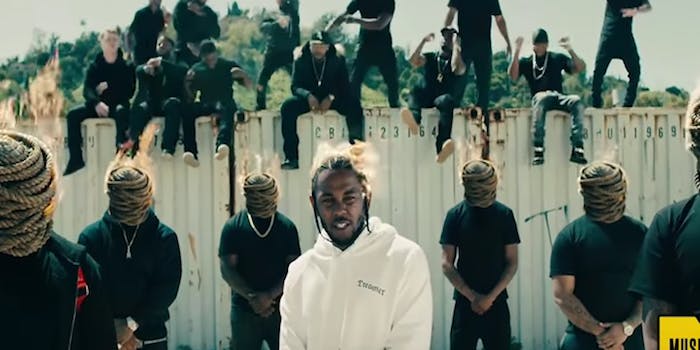 Is Kendrick Lamar releasing another album on Easter?

The clues are piling up.

The internet remains ablaze from Thursday night’s blockbuster release of the excellent DAMN. But if the rumors are to be believed, rapper Kendrick Lamar might be about to drop a second disc, potentially called NATION.

The theory started from a Reddit thread, based on a Good Friday and Easter Sunday connection. (Good Friday was the crucifixion of Jesus Christ, and Easter marks his resurrection.) Then there’s the math: “damn” and “nation” do join to forge “damnation.”

All kinds of clues have been claimed, such as the anagrams made from the letters in the DAMN tracklist. The”M” over Lamar’s head also looks like devil’s horns, perhaps suggesting a dark side.

A frequent user of the Blood/Crip duality motif, the Compton rapper made a change to his Spotify profile picture this week: From him standing in front of a red wall to a blue one. And on recent single “The Heart Part IV,” he raps:

“I said it’s like that, dropped one classic, came right back / ‘Nother classic, right back / My next album, the whole industry on a ice pack / With TOC, you see the flames / In my E-Y-E’s; it’s not a game.”

To some theorists, “TOC” means “The Other Color,” maybe blue for the infamous Southern California Crip gang. That parallels with the Bloods gang, and DAMN.‘s red lettering.

so Kendrick might be putting out a new record on Sunday called #NATION. if that's true, these two records come together as DAMNATION pic.twitter.com/1evE2XxTDz

All of this is a considerable, Mr. Fantastic-level stretch. But it should be said that no one has officially ruled out the widely circulated rumor, not Lamar, his label TDE, or parent label Interscope.

Then there’s label producer Sounwave’s cryptic tweets, which he leaves up to our interpretation. His use of Morpheus seems like a dead giveaway, however:

But what if I told you… that's not the official version..

On the internet, the rapper is blocking out the sun and taking over pop culture. Don’t be surprised if Lamar rises on Sunday—though we’re not betting on it.