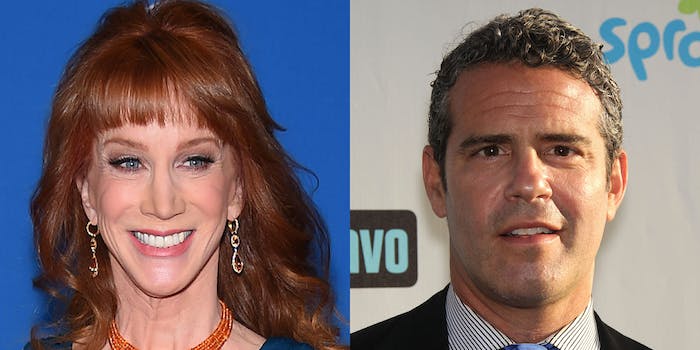 She also called out TMZ for being 'deeply misogynistic.'

Andy Cohen has responded to Kathy Griffin‘s claims that he offered her cocaine on set.

On Saturday, Griffin posted a video to YouTube titled “A Hell of a Story,” which is in part about her former boss Bravo executive Andy Cohen. The two times she was on his show, Watch What Happens Live, Griffin alleges Cohen offered her cocaine beforehand.

She also called out TMZ for being “deeply misogynistic” and TMZ’s Harvey Levin for making a living off tearing women down and being “in bed” with the Trump administration.

The video is allegedly a response to Cohen—who worked with Griffin on her Bravo show My Life on the D-List—telling TMZ photographers that he didn’t know Griffin.

Even when it's on tape, there are doubters? He is NOT kidding w paps. Was my boss for 10 years. Treated me like a dog. Deeply misogynistic https://t.co/geqFsLtWy1

He followed up her video with a tweet saying the cocaine story is “totally made up,” but didn’t respond to her claims of misogyny.

I am completely stunned by this story. It is 100% false and totally made up.

CNN recently announced that Cohen will co-host this year’s New Year’s Eve celebration with Anderson Cooper, after Griffin was fired for posting a photo of her holding Trump’s severed head.