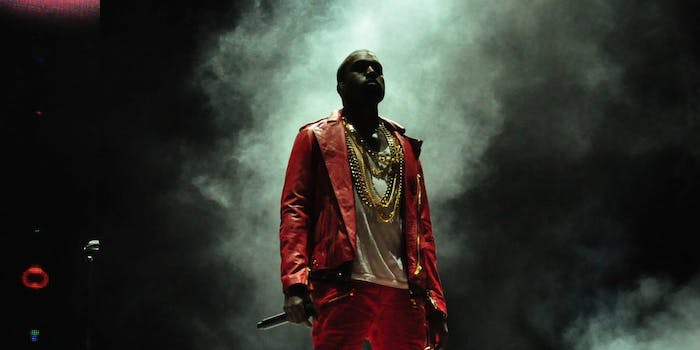 That sort of re-contextualization may have seemed radical back in 2004, when a then-obscure Danger Mouse burst onto the scene by a slamming the Beatles’ White Album and Jay Z‘s The Black Album together into The Grey Album. Even from this initial jumping off point, it’s easy to see what these types of records have working against them. Even in cases where the final product is great—like David Rees’s Taylor Swift/Aphex Twin mashup, Aphex Swift—there’s an expectation that the execution of the music itself is an afterthought to a pun-enabled premise.

All of that said, if you have, at any point in your life, counted yourself a fan of either Kanye West or Weezer, you should probably check out Yeezer, by a Pennsylvania producer going by the handle Chuckie Nugget.

While West is off plotting his 2020 presidential run to stop tyrant billionaire Donald Trump from getting a second term in the Oval Office and Weezer continues its descent into the depths of dorky dad rock, Chuckie Nugget has discovered something elemental about both artists, something that fuses their music together in a way that has no right to work as well as it does—they’re all huge goobers.

Both West and Weezer have always had the air of nerdy kids trying, with varying degrees of success, not just to appear cool, but to bend the arc of coolness toward their own particular obsessions. If Taylor Swift had bested Kiss at the 2009 MTV Video Music Awards instead of Beyoncé, Rivers Cuomo would have been the one to grab the microphone and let her finish. Well, to be fair, there’s no way he would have actually done that, but you can imagine him fantasizing about it in his head.

What’s great about Yeezer, especially for the large cadre of Weezer fans who haven’t been particularly enthusiastic about their last decade or so of output, is that the addition of West into their newer songs is done in a way that highlights how the band’s strengths have remained, in many ways, consistent from Pinkerton through today. Cuomo and co. can write one hell of a hook when they want to. Similarly, it shows how tracks from 2013’s Yeezus have an strong undercurrent of winking, populist fun under a façade of austere, high-art seriousness.

Take, for example, “The Girl Got BLKKK,” which combines West’s “Black Skinhead” and Weezer’s “The Girl Got Hot” from 2009’s much maligned Raditude. The bedrock of Weezer’s shout-along hook renders West’s instantly iconic floor tom fill and machine-gun rapping—which read as an attempt at sonic violence in their original context—into a neon-colored, release-the-confetti dance party.

On the album’s Bandcamp page, Chuckie Nugget implores listeners not to buy his album and instead just to download it for free—undoubtedly for legal reasons. Keeping the album free is a way to keep the uncleared samples inside the realm of fair use. Instead, the producer urges listeners to “buy the newish Weezer album, or tell Kanye to release Swish.”

Update 3:59pm CT, Oct. 5: Though the tracks are no longer streaming on Bandcamp, you can still find them on AudioMack or embedded above.