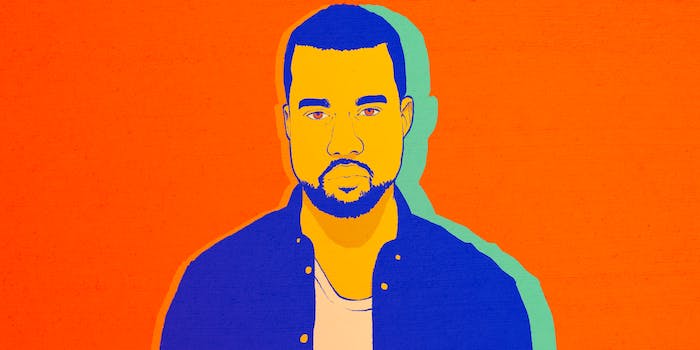 His album release has become its own livestream.

More than a month after releasing The Life of Pablo, Kanye West is still making public edits on the album. And now, one track has quietly escaped from Tidal.

“Famous,” which famously included the line “I feel like me and Taylor might still have sex/Why? I made that bitch famous,” has made its way to Spotify and Apple Music. It’s an updated version of the track, which apparently traded the line “She be Puerto Rican day parade wavin'” for “She in school to be a real estate agent.” West informed his Twitter followers that he was still fixing the album, an ongoing act that appears to have no finish line just yet.

On Sunday, West also shared the new track “Ultralight Prayer” on his SoundCloud, which essentially starts—with the preacher Kirk Franklin—where Life of Pablo‘s “Ultralight Beam” ended. It’s yet another edit.

Around the same time West informed his fans that he was still fixing the album, he started a thread about how his tweets and his music are “a form of contemporary art.” He acknowledged that the editing of Pablo was a public act, with Twitter a canvas for his ever-changing expressions; if he doesn’t like something, he can paint over it.

As Jon Caramanica noted last month in the New York Times, West’s release of Pablo “has been an unprecedented public marathon,” and through the static of meltdowns, pleas, and beefs, he’s made the album release a real-time conversation, devoid of one-time-event status. It’s become its own livestream.

Pay close attention to the multiple iterations and you hear an artist at work, as well as a celebrity tending his image. It’s everything bared — process as art.

New versions and edits of songs existed before West, of course, but he’s taking the long way home with Pablo, and now by dipping a toe outside of Tidal—which was criticized for its handling of Pablo and has struggled with its social media presence—it appears he’s taking even more feedback into consideration. On the Internet, is a product ever truly finished?