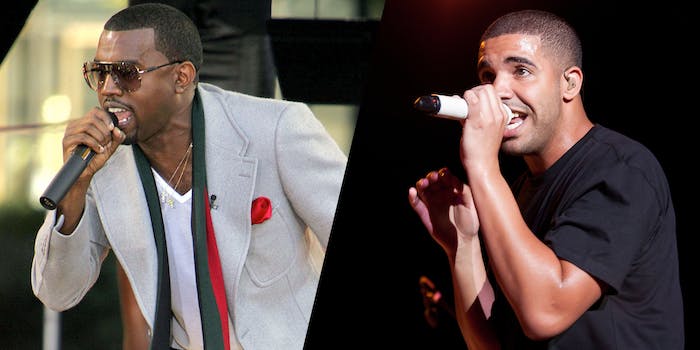 Calabasas is the new Abu Dhabi?

First, the rapper commissioned a board in Los Angeles with a special congratulations message to Rihanna for being honored with the Michael Jackson Video Vanguard Award at Sunday’s MTV Video Music Awards.

And now a second has popped up, this one with both Drake’s OVO Sound and Kanye West‘s G.O.O.D. Music logos. Other than that, there’s only the text “Calabasas is the new Abu Dhabi” (Calabasas being the Los Angeles suburb where both rappers have homes.)

A photo of the billboard was posted to Reddit over the weekend, and people immediately started working to figure out what it might mean.

Fans on Twitter think it could be teasing a joint record from the two artists, maybe even test driving an album title or the name of a single:

The collaborative album theory actually isn’t far-fetched: During an appearance at OVO Fest earlier this month, West hinted onstage that he and Drake may have a project in the works. And less recently, Drake mentioned in an interview that he and West had discussed doing a mixtape together.

Only time will tell what these two are cooking up, but if it’s new music: cool.