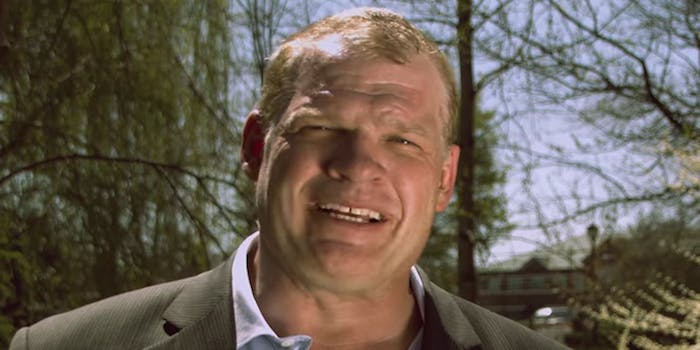 Screengrab via Jacobs for Mayor/YouTube

Glenn Jacobs, also known as Kane, is running for mayor. Yes, the wrestler

Now also an insurance agency owner and running on Libertarian principles, Jacobs announced his run this week at Knoxville’s Sweet Pea’s BBQ, because of course he did. He also released his first campaign video.

I’ve lived in East Tennessee for over 20 years at this point. It’s just a great place. I love it here. My family loves it here, and I just want to have as much positive impact on things as I possibly can.

He’s got a lot of promises for his constituency as well:

As Knox County mayor, I promise to keep taxes low and make Knox County a place everyone can be proud of. I see my role as that of a facilitator among the different communities in our area. And also I think that Mayor Burchett has done a very good job with transparency in government and I would continue along those lines.

Is this the face of the next Knox County, TN mayor?
Glenn Jacobs, aka wrestler #Kane, making announcement Tues@wbirhttps://t.co/UuTBhDaaxw pic.twitter.com/u7oVgeK4mX

Jacobs initially rose to prominence as Kane, the Undertaker’s demonized brother and two-time heavyweight champion. In recent storylines, however, he’s become a corporatized Kane, speaking more and wearing a suit.

As unusual as this run seems on the surface, one of the sport’s icons reminds you not to overlook political wrestlers:

Don't underestimate a former wrestler entering the political arena. I was mayor @BrooklynPark prior to Governor https://t.co/rDpldlK9jW

Perhaps Jacobs can get Jim Ross to announce all of his municipal decisions.