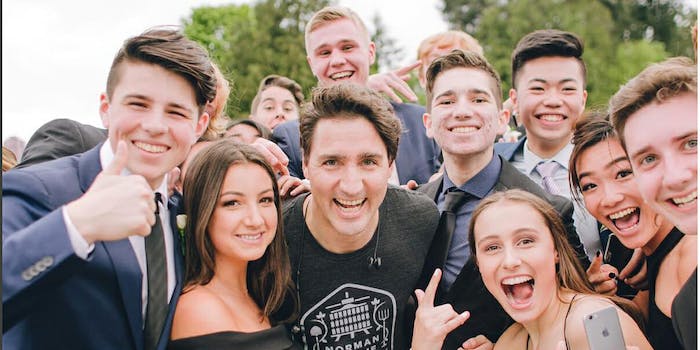 Teens in Canada received a dream gift for their prom: a selfie with Prime Minister Justin Trudeau.

Trudeau was jogging around the Stanley Park Seawall in Vancouver, British Columbia, on May 19, when he and his official photographer, Adam Scotti, ran across the teens on their way to prom.

Scotti captured Trudeau passing the group and posted the moment onto Instagram.

“Sometimes it’s just scenic shots, other times, it’s running past an unsuspecting grad group—half clued in, others were more distracted by the ginger with the camera,” Scotti wrote on Instagram. “A memorable moment for all. I always love to watch people’s faces as they realise who just ran past, often several paces after he has passed.”

I run. Tommy runs. The boss runs. This is part of a little side project to document the places we go and the runs we go on. Sometimes it's just scenic shots, other times, it's running past an unsuspecting grad group – half clued in, others were more distracted by the ginger with the camera. A memorable moment for all. I always love to watch people's faces as they realise who just ran past, often several paces after he has passed. #cdngingersnaps #stanleypark #vancouver #cdnpoli @canadianrunning

Luckily the teens managed to get a selfie with Trudeau before he returned to his run. Their prom photographer, Cameron Corrado, shared the shot on his Instagram.

Is this the most Canadian thing ever?

Scotti said these photos are part of a side project he and Trudeau have, where they document the places they go and the runs they go on.