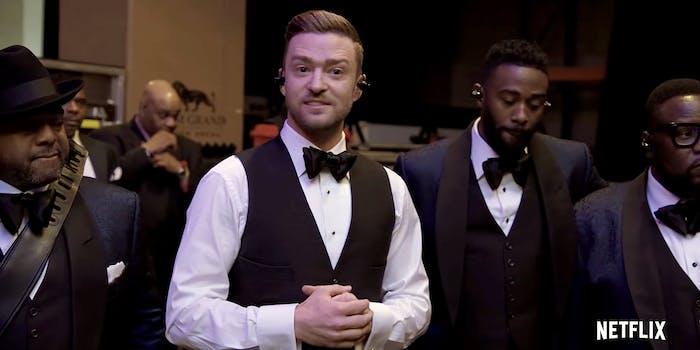 His biggest show to date is finally coming to our screens.

Justin Timberlake’s last worldwide tour went to 134 cities in 787 days, but now everyone who missed out will finally get the chance to see it.

Netflix on Friday released the trailer for Justin Timberlake + The Tennessee Kids, a new concert film from director Jonathan Demme, that captures Timberlake’s final stop of The 20/20 Experience in Las Vegas. We’ll see the concert of course, but the trailer shows some of the smaller moments behind the show as well as a focus on Timberlake’s band. Before they go on, there’s even a big pep talk.

If your Timberlake concert knowledge only covers *NSYNC’s Madison Square Garden concert, you already know he can put on a show. Those of us who didn’t see him on tour will see just how he pulls it off when the special saunters onto Netflix Oct. 12.