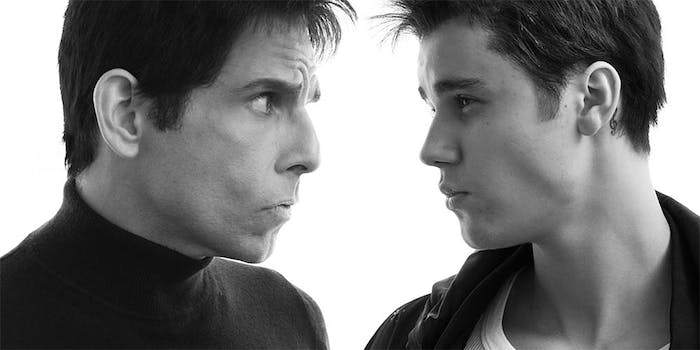 He's got the face down already.

He posted a teaser photo alongside Zoolander star Ben Stiller Wednesday on social media, showing Bieber and Stiller’s Derek Zoolander in the midst of a staredown.

There’s no other context to the photo, but an Instagram post by Bieber of the same photo reveals that he’s wearing a wig in the photo—his real hair is much shorter right now. He joins a slew of other cameos from models like Karlie Kloss, Alessandra Ambrosio, Naomi Campbell, and Cara Delevingne.

Bieber flew to Rome this week, with Italian entertainment sites claiming he was there to shoot the cameo. He hinted via Facebook on Monday that he was “working on something big right now in Europe.”

But even when Bieber is working on something big, his past is still following him. According to the Italian website Repubblica, investigators are trying to determine whether a warrant for Bieber’s arrest in Argentina for a 2013 incident in Buenos Aires is enforceable in Italy.