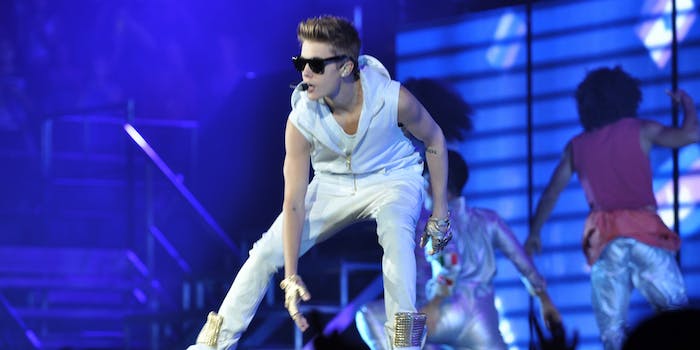 Justin Bieber stripped down to his boxer shorts for an awkward, scripted (comedy?) bit. The reaction was unexpected.

Justin Bieber stripped down to his boxer shorts for an awkward, scripted (comedy?) bit with supermodel Lara Stone in front of a CBS audience Tuesday night. Some onlookers sort of liked it.

But most booed him mercilessly.

The strip show was for Fashion Rocks, CBS’s annual fundraiser that melds high fashion with live musical performances. My initial reactions to the video were: What is this show? Ooh, I like his blazer! When did he get all those tattoos? I’m hungry. Then, over a sandwich, I listened to the audio a few times to try to make sense of what Bieber was doing.

It’s hard to make out what the Biebs is saying over all of the boos, but I think he’s declaring that he doesn’t feel comfortable being so dressed up. Or he’s uncomfortable wearing clothes at all? Not really a surprise considering he’s regularly spotted kicking it in the club sans shirt. He’s not what most would call “swole”—his body type is more like my neighbor’s brother’s, who just smokes weed and does push-ups—but Bieber has cool tattoos, so why not show them off?

Remember when Bieber was polite, and nice to parents, and fans would go into screaming fits just from the thought of him taking his shirt off? Like, just casual shirtlessness, in the privacy of his own home—not right there on stage. He was such an earnest little Canadian kid with a big dream. He was sexy in a take-you-home-to-Mom kind of way.

A lot can change in a few years.

He’s still in my top five cool celebrities to chill with, though. Right there with Cam’ron, Seth Rogen, Diddy, and Joe Biden.