The singer deleted his account after receiving too many mean messages about his 17-year-old girlfriend.

Justin Bieber has quit Instagram, leaving the world in turmoil and the future uncertain for us all.

Bieber had recently started posting photos with Sofia Richie, Lionel Richie’s 17-year-old daughter, and many fans were not pleased to see hints that Bieber had a new girlfriend. 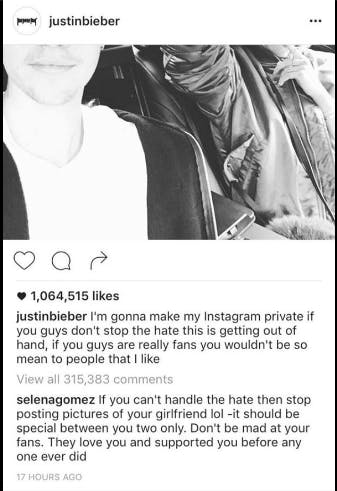 In one of his last Instagram posts, Bieber wrote, “I’m gonna make my Instagram private if you guys don’t stop the hate this is getting out of hand.” His ex-girlfriend singer Selena Gomez responded, “If you can’t handle the hate then stop posting pictures of your girlfriend lol.”

“It’s funny to see people that used me for attention and still try to point the finger this way,” Bieber replied. “Sad. All love.” Gomez’s final response hinted that he’d cheated on her when they were dating, adding, “no wonder the fans are mad.”

The hashtag #JustinDeactivatedParty became Twitter‘s top trending topic on Tuesday morning, with fans expressing both support and criticism for his decision to quit Instagram.

Justin deactivated for a 17 year old, but that's none of my business #JustinDeactivatedParty pic.twitter.com/xSmwlnP9mO

Bieber is still on Twitter, but his most recent tweet was three whole days ago: an innocuous message professing his love for Tokyo. Nowhere near as interesting or provocative as his Instagram posts.