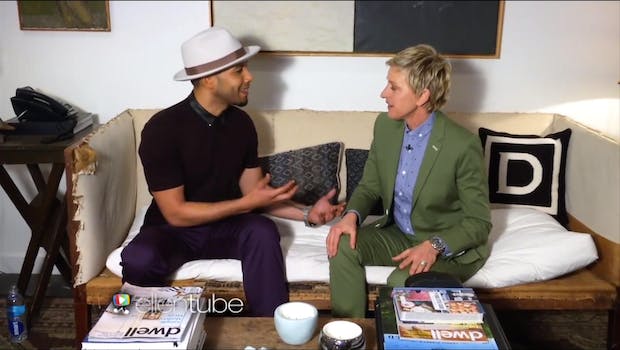 For this actor, 'there's never been a closet.'

Since the premiere of Fox’s Empire, the Internet has been abuzz with speculation about the sexuality of actor Jussie Smollett. Despite Grindr profiles, leaked nudes, and his fellow costar confirming that he’s gay to reporters, the 31-year-old has refused to address the issue. “I am not willing to confirm or deny anything,” he told the hosts of Sway In the Morning last week.

Yet, it appears as if Smollett’s feelings have changed. On Monday, the actor appeared on Ellen to talk about landing the lead role and the response he’s felt from fans since his character came out, but chose not to address his own sexuality during the interview.

Instead, after the show wrapped, Smollett sought out the host in her dressing room and asked if she’d be willing to film one last segment backstage to address all the rumors.

“@TheEllenShow:Being true 2 who u r can b1 of the hardest things n the world.I’m proud of @JussieSmollett. https://t.co/jzobzzaYH6”I❤️u ELLEN

In coming out, the actor refuted that he’s ever hidden his sexuality away, claiming that he’s merely wanted to keep it part of his private life. “There’s never been a closet that I’ve been in,” he shared. “I don’t own a closet, I got a dresser, but I don’t have a closet, but I have a home and that is my responsibility to protect that home.”

He chose to end their intimate sit down with a joke, feeling relived after getting the subject off his chest. “My mama knows, my mama likes me a lot,” he told Degeneres before turning to the camera and shooting a sly grin. “And yes, I take her to The Sound of Music sing-along every single year.”