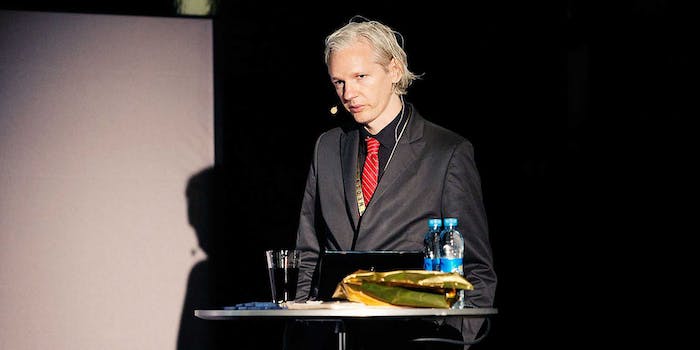 The WikiLeaks founder makes for a terrible hypeman.

Last year, the controversial rapper contributed to the WikiLeaks founder’s TV show, The World Tomorrow. Appearing via Skype from the Ecuadorian embassy in London, Assange returned the favor before the release of her new album, Matangi.

In his 10-minute speech, Assange described M.I.A. as “the most courageous woman in Western music, without exception,” and spoke about the importance of WikiLeaks. “The military occupation of cyberspace is also the occupation of our primary communication space,” he said.

A longtime supporter of WikiLeaks, M.I.A. has previously spoken out about Assange’s house arrest. It could even be said that he had some influence over her new album, after he helped her find words that rhymed with “tent” for her new song “atention”. In an interview with the BBC last week, she explained, “Julian Assange came into the studio and took my computer and basically decrypted the whole of the internet, and downloaded every word in the whole of the language that contained the word tent within it. He gave me, like, 4,000.”