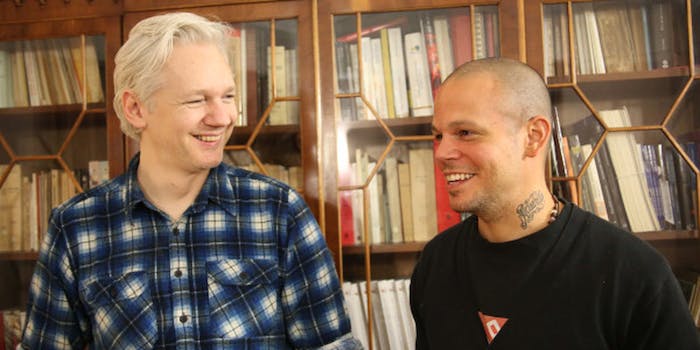 Julian Assange wants to break into the Latin music scene

This is surely a symptom of embassy fever.

Julian Assange, the enigmatic, silver-haired WikiLeaks founder who helped upend, expose, and infuriate the world’s most powerful government by publishing a series of gargantuan and humiliating leaks of state secrets, wants to break into the Latin music business.

This is surely a symptom of embassy fever.

Fox News Latino reports that René Pérez, known as “Residente” in Puerto Rican rap rock group Calle 13, met with Assange in the Ecuadorian Embassy in London on Thursday for a so-called “live song writing session.” Assange and Calle 13 will continue their collaboration online, inviting the public to take part on Twitter. The song “will focus on the subjects of disinformation and media manipulation, with Residente and Assange offering a first verse as a guide to build on, with public response,” a Calle 13 press release said.

Assange has been holed up in the Embassy since June of last year, when the Ecuadorian government granted him asylum. He lives in a small office converted into makeshift living quarters, about the size of a studio apartment. The World Tomorrow, the television show he filmed with Kremlin state broadcaster Russia Today, ended in July 2012. He has, it goes without saying, a lot of free time to fill.

In the press release, Residente, never one to shy from political activism, said he supported Assange because he “revealed information about what governments are doing. Those who do not support him are attacking their own human rights, fundamental rights.”

Assange has been known to occasionally bust out dance moves so powerful they destroy state-secrets. We hope he performs them again in the official music video.