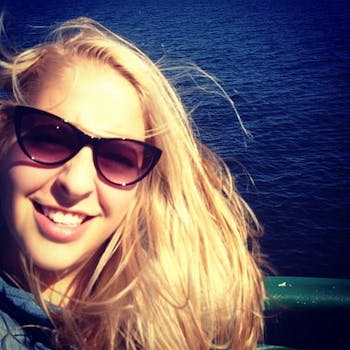 With her ukulele and a webcam, Nunes developed an audience of thousands that helped fund her new album.

Julia Nunes describes herself as an “accidental” success story.

From her dorm room in college, Nunes launched a YouTube channel with little more than a webcam, her ukulele, and a few cover songs, ultimately leading to more than 50 million views, an appearance on Conan O’Brien, and a tour with Ben Folds—and she did it all on her own terms.

“She’s a model for where music is headed, intentional or not,” proclaimed Waxy’s Andy Baio said at XOXO Festival last month.

The blond, 23-year-old, Fairport, N.Y. native started posting a mixture of covers and original songs to her YouTube channel in 2007 as a way to keep her high school friends updated on the music she was working on. There was a rough charm to her early recordings, perhaps best captured in her winning entry to the World Ukulele Video Contest—a ukulele cover of  Destiny’s Child’s “Survivor.” In it, Nunes layers her vocals and slices together quirky footage of herself, coming across like a one-woman girl group, with attitude and charisma.

YouTube is known for cranking out such one-hit wonders: Carly Rae Jepsen (“Call Me Maybe”), Kreayshawn (“Gucci Gucci”), and Rebecca Black (“Friday”). But Nunes found a way to break the mold, slowly building a loyal following through a steady stream of videos, updates, and covers of the likes of Kanye West and Nat King Cole.

Nunes even received an offer to tour with Ben Folds, one of her idols, after she covered one of his songs, and actress Molly Ringwald, best known for ’80s movies Pretty in Pink and The Breakfast Club, said that she was inspired to take up the ukulele after seeing Nunes perform on YouTube.

As Nunes posted more videos online, the ukulele community pushed her to release original content. “Into the Sunshine,” her breakthrough original hit released in January 2008, was her first song to get over one million views and featured on the front page of YouTube. That pushed her past 1,000 subscribers.

Years—and more than 196,000 subscribers—later, she’s still not completely used to the popularity from her videos.

“I don’t know if you can get prepared for that because there’s no rulebook. So you don’t really know what you’re in for until you come to it,” Nunes said. “So every new thing that happens I’m fumbling until I get my footing.”

Nunes posts her original songs as well as covers from her favorite bands on her channel, and every so often she’ll post a video answering fan questions. When she does post a music video, she plays all of the instruments and provides the vocals. Depending on the song, the process can take anywhere from two hours up to a week if she’s struggling to learn something, which you can tell by the number of outfits she wears.

After three independently released CDs and performances with Ben Folds, Ben Kweller, and at Bonnaroo, Nunes turned to Kickstarter to a more professional album of original material, Settle Down. Along with the album she offered perks like signed and designed ukuleles, T-shirts, and even a house concert for a lucky few.

She managed to surpass her original goal of $15,000 on the first day, and by the time the fundraiser ended a month later, she raised $77,888. Nunes’s Kickstarter project is currently the 13th most-funded music project in Kickstarter history. To promote her album, she even made her television debut on her favorite late-night talk show, Conan.

According to Nunes, her accidental success is indicative of a new era in show business, where people will rely on the kindness of strangers and more artists are able to retain control over their music.

“I think it’s way more work, so long as the kids coming up keep in mind that it’s not all fun and silly-posting videos and it’s actual work and you have an obligation to the people that trusted you with their money,” Nunes said. “I think that’s the best you can hope for: If it becomes more in the hands of the artists and less in the hands of the executives.”

While Nunes is currently focusing on her current album and a tour with Walk Off the Earth later this month, she’s always writing new music and doing what she wants to do.

“If you’re making something that you like, then there is a fan base out there for you,” Nunes said. “They just have to find out.”