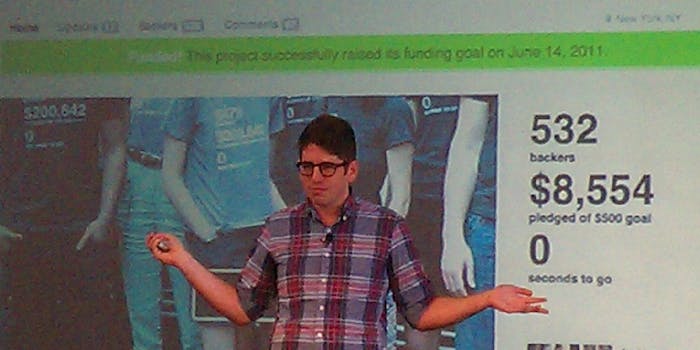 XOXO Festival: From Kickstarter, with love

The two-day tech conference offered a glimpse of the crowdfunding site’s past, present, and promising future.

Kickstarter was on full and constant display at XOXO Festival, a two-day conference last weekend in Portland, Ore., focused on the disruptive technology that allows entrepreneurs and artists to directly engage with their audience.

In the marketplace, alongside Etsy shops and a live demonstration of the MakerBot, the crowdfunding platform exhibited a hall of fame for successful projects (which included Amanda Palmer’s Theatre Is Dead), not far from where The Jammy, a “funky-fresh boombox,” drummed up support for its ongoing campaign.

In fact, XOXO Festival was the first event to issue tickets solely through Kickstarter. More importantly, it embodied the transformative nature, community spirit, and creative potential of the popular crowdfunding platform.

Everyone at XOXO Festival was somehow connected through Kickstarter. The conference sold out in just two days on the site—an impressive feat for an inaugural event—as 400 supporters pledged $400 each for a weekend’s worth of intimate networking, presentations, and fringe events. And these weren’t ordinary backers, either.

As Kickstarter cofounder Yancey Strickler noted, the 735 people who backed the festival had supported a total of 5,574 campaigns on the site, with an 80 percent success rate. And 80 attendees were responsible for the creation of 55 launched projects.

Even keynote speaker Dan Harmon, the creator of Community, turned to Kickstarter to fund Anomalisa, his stop-motion animation film with Charlie Kaufman, while Portland Mayor Sam Adams, who delivered an opening address, was the first city official to create a Kickstarter page to promote projects in the local community.

“It seemed so fresh and new and common sense,” offered James Swirsky, co-producer of the stunning documentary Indie Game: The Movie, in regards to the film’s two successful Kickstarter runs.

That’s the true secret to Kickstarter’s success: It fosters community, creating an interdependent and “people-powered economy,” as Etsy’s Chad Dickerson put it. By cutting out the traditional middle-man and going directly to fans for pledges of support, Kickstarter fosters a shared experience, one that can bolster the transparency of an operation and help develop brand loyalty through singular initiatives.

And XOXO proved that there’s untapped potential for Kickstarter to also serve as an events coordinator. After all, Kickstarter CEO Perry Chen’s original inspiration for the site came from his desire to host a concert in New Orleans in 2001, without the risk of taking a hit or having to issue refunds.

Kickstarter’s “all or nothing” system, wherein patrons are only charged for pledged support if the project reaches its goal, creates a conditional circumstance that alleviates front-end risk. People can also see exactly who is attending an event and what it’s going to take to make it happen, the latter helping create a sense of urgency as projects near completion.

He would know. Aside from coining the term “supercut,” Baio served as an early developer and CTO for Kickstarter. He also used the site to commission Kind of Bloop, an 8-bit tribute to Miles Davis’s landmark album, Kind of Blue.

“Imagine a fan of Fiona Apple’s finding an intimate venue and reaching out to her management to see what her schedule looks like and how much it would take to get her come down,” Baio said.

“You’d be flipping the equation upside down.”

Kickstarter isn’t perfect—not by a long shot. The platform functions largely on good faith. Project creators are left fully responsible for delivering on their commitments to backers, with little in the way of a safety net for the consumer. That’s a substantial risk, especially for first-time project creators who have to figure it out as they go and potentially deal with overwhelming, viral success. A recent study found that 75 percent of Design and Technology projects failed to meet their original deadlines.

But XOXO showed how the system should ideally work and offered no shortage of tips for future project creators.

“Tell a story,” offered Dan Provost and Tom Gerhardt of Studio Neat, responsible for two blockbuster hardware projects on Kickstarter, the Glif and Cosmonaut, an iPhone stand and stylus respectively.

“People really do what to see how the sausage gets made.”

After struggling with a six-month delay with Cosmonaut, the two also suggested that creators refrain from setting deadlines on their projects, or if necessary, to set an extremely generous one. “Deadlines are not a feature.”

Baio outlined his keys to Kickstarter success to the Daily Dot:

“And you really need to err on the side of being confident in delivering your promises to backers and over-delivering.”

In every regard, XOXO Festival nailed it.