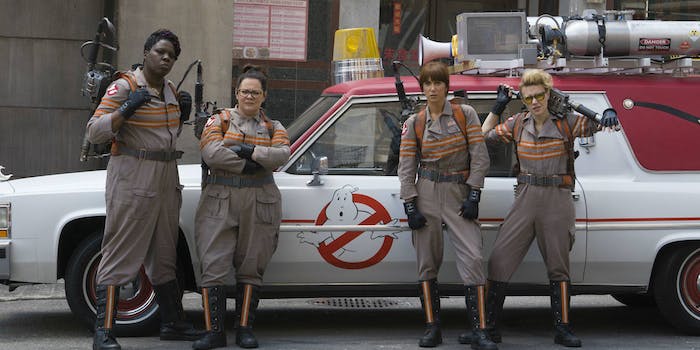 The Ghostbusters reboot has come under fire since the femme-powered project was first announced in 2014 and has drawn even more criticism since the trailer—the most “disliked” in YouTube history—debuted in March. Producer Judd Apatow thinks those critics happen to be Donald Trump supporters.

“I would assume there’s a very large crossover of people who are doubtful Ghostbusters will be great and people excited about the Donald Trump candidacy,” Apatow tells Uproxx. “I would assume they are the exact same people. That movie is made by the great Paul Feig and stars the funniest people on Earth, so I couldn’t be more excited.”

The controversy reached new heights when it was revealed that Leslie Jones, the only African-American Ghostbuster, was also the sole lead in the film not playing a scientist. But despite that issue being addressed and turned on its head when it was reported that the part was originally written for Melissa McCarthy, fans still found the general casting problematic.

Some asserted on YouTube that “feminists killed one of the very few classics.” However, Apatow says people “have paid too much attention to just some angry trolls” and the film will be judged on its own merits.

“I don’t think anything really matters the way you think it does,” he said. “The movie comes out, and it will be great, and people will just be happy to have it. It’s not like anybody really cares about a couple of idiots who hold onto the idea that things never evolve. I always think, you know, we have our past and if you can come up with a new, cool way to do something, then that’s exciting and hopefully it will make a lot of people happy.”