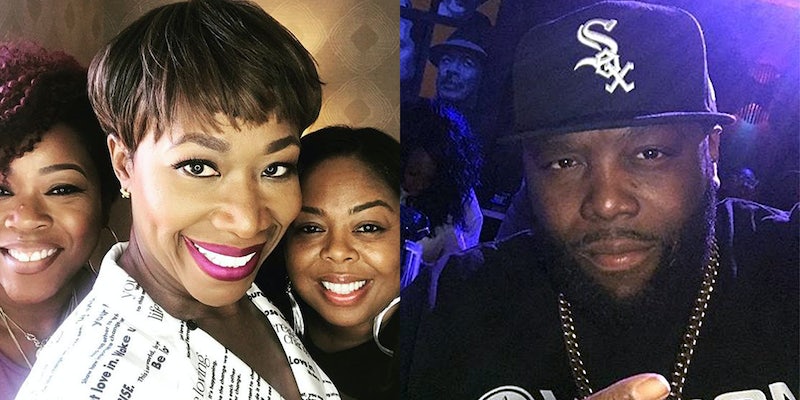 Killer Mike has been followed by controversy ever since he filmed an interview for NRATV last month. He tried to clear the air after the segment aired the same day as March for Our Lives, but there are apparently still some bad vibes.

MSNBC host Joy-Ann Reid is one of the people who criticized the rapper for the NRA segment, which he defended as being about Black gun ownership. Over the weekend, he commented on one of her Instagram posts, which referenced “H&M.” Killer Mike apparently thought it referred to the store H&M, which was blasted in January for selling an offensive sweatshirt modeled by a young Black boy.

And not to be outdone… @glamluxxe and @savvychicz, who rocked the H&M for our Elgin Baylor shoot! #AMJoy #GlamSquad

“So me doing an interview about black gun ownership with the NRA is ‘bad,’ but you promoting a company that tagged a black child a monkey is ‘good,’ cool,’ and ‘acceptable,’” Mike reportedly commented. Reid reminded him that H&M stands for hair and makeup. She also accused him of hanging out “in the sunken place.” He deleted the comment.

The face-palm could be heard throughout the internet, but there might be a positive outcome: Killer Mike says he and Reid could be talking it out soon.

Just Talked to your producer @JoyAnnReid looking forward to speaking about Black Gun Ownership. Thank u and love and Respect.