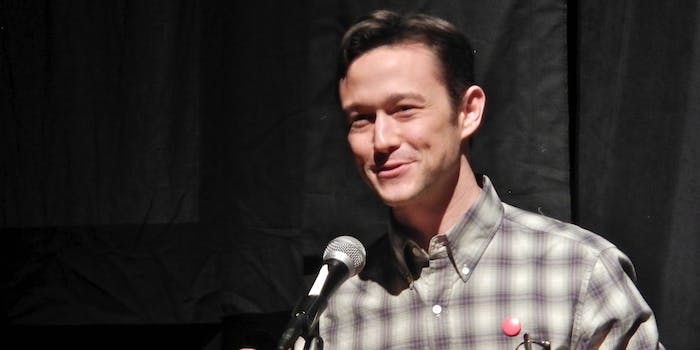 Unless there's a hangup in contract negotiations, Oliver Stone has his Snowden.

According to a report from Variety, he was offered the part by director Oliver Stone, and has accepted. Contract negotiations haven’t begun yet, but for the moment it looks like Gordon-Levitt is set to take on the role.

After recently filming another biopic (The Walk, a film about high-wire artist Philipe Petit, best known for the documentary Man on Wire), this looks like a definitive new step for Gordon-Levitt’s career. In the past his leading roles have mostly been in indie movies like Mysterious Skin and Brick while he played supporting parts in blockbusters like Inception and Sin City 2, but a role like Edward Snowden is an obvious move toward big-budget Oscar fare.

The Snowden movie will be based on two books: Luke Harding’s The Snowden Files: The Inside Story of the World’s Most Wanted Man, and Time of the Octopus by Anatoly Kucherena, Snowden’s lawyer. Oliver Stone’s biopics and historical films aren’t known for their strict adherence to cold hard facts, but it’s likely that this movie will be weighted in Snowden’s favor. Stone has long been an outspoken supporter of Wikileaks, and at one point described Snowden as “a hero.”

Once Joseph Gordon-Levitt’s deal is finalized, they will start filming in late 2014 or early 2015. Sooner will be better than later in this case, because Oliver Stone isn’t the only filmmaker working on a Snowden biopic. In May of this year, the producers of the James Bond franchise bought the rights to Glenn Greenwald’s book No Place to Hide: Edward Snowden, the NSA, and the U.S. Surveillance State, with the aim of adapting it into a movie as well.