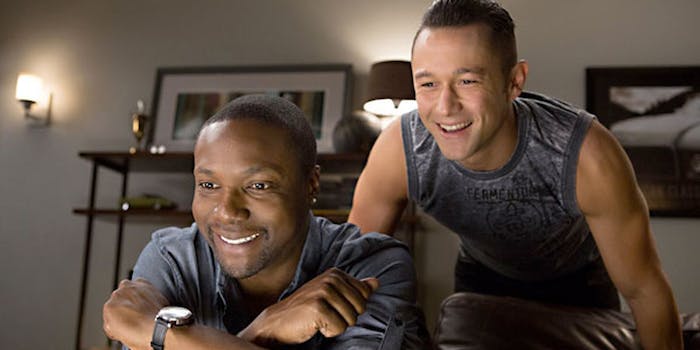 Joseph Gordon-Levitt and the naked truth

“It’s a movie about how people objectify each other,” said writer/director/star Joseph Gordon-Levitt.

Jon Martello (Gordon-Levitt) is a swaggering but charming and friendly guy from New Jersey whose life revolves around working out, getting his hair just so, barhopping, one-night stands, and his blue-collar upbringing.

“Sex, his family, his friends, his church, are always disappointing him,” Gordon-Levitt said. “The truth is that if you try to live your life by setting static expectations and trying to meet them, you’re doomed, because you’re not being present and you’re not really paying attention.”

It’s a heavy topic for a film with such a light heart. After a string of multiplex starring roles (Looper,The Dark Knight Rises, Premium Rush) Gordon-Levitt admits there was some pressure to direct something more obviously mass-market for his first feature. But, he said, “if I’m going to spend two years doing it, the reason is to put something out there that wouldn’t be out there if I didn’t do it.”

Onscreen, Jon is pulled between three magnetic poles in his life: Scarlett Johansson as Barbara, the seemingly perfect woman he meets at a bar; Julianne Moore as Esther, the affable but undiplomatic middle-aged woman at his college; and his father, Jon Sr., played with an uncanny familial resemblance by Tony Danza. For Barbara, “Scarlett was the only actress I ever thought of,” said Gordon-Levitt. “She gave a killer performance that brought so much nuance and depth and charm and heart to a difficult character to play.” Gordon-Levitt felt it made sense that Johansson would be attracted to a movie that dwells so much on how people objectify one another.

“She’s a really smart woman, she’s a really talented artist, and yet so many people, all they talk about is her outer appearance,” he said. “I could see why she would be into making fun of that.” As for Danza, he said, “Tony is always adorable and lovable, and you can’t help but smile whenever you see him on the screen. So I really liked the idea of him playing a guy who’s got a lot of shortcomings and is kind of a pig sometimes.”

The most complicated relationship in the film is the love-hate bond between Jon and Jon Sr. Danza said, “We go to hug and it’s like magnets repulsing.” The all-important dinner scenes at the Martello family home, where the two men-boys bicker and snipe with love, are familiar to Danza. “I grew up in a family where if they weren’t yelling, they didn’t care,” he said. In many ways, it’s Jon Sr.’s influence that makes his son who he is. “He’s the guy who sets the tone for the house,” said Danza. When it comes to how Jon treats women, there’s more than a dash of his father in movement and tone. “My uncle has a saying: ‘Apple trees make apples.'” 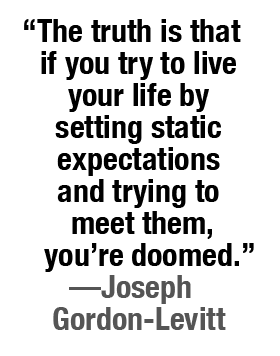 “When I was a kid, if I wanted a magazine, I either had to raid my uncle’s stash or I had to go to a store, go up to the counter with it in my hand, then my neighbor would walk in and see it,” he said. “That was a tremendous governor on behavior. You don’t have that anymore.”

To anyone still surprised that the kid from 3rd Rock From the Sun is making intelligent indie flicks, know that it’s no shock for Danza. The pair met on the set of 1994’s Angels in the Outfield, and the then-43-year-old Taxi star bonded with the 13-year-old Gordon-Levitt over a shared love of rollerblading. Danza said, “I would say to him, ‘Come on, Joe, let’s go skate,’ but every once in a while he’d say, ‘Not today, I’m following the director; I want to see what lens he’s using.'”

While his acting career since then has kept him busy, Gordon-Levitt’s production fascination flexed its muscles through his collaborative, crowdsourced creative project hitRECord. Through that, he directed, wrote, and learned to be comfortable filming himself (“I remember a time when seeing my own face and hearing my own voice was difficult,” he said), and he has applied all those skills here. He’s also a keen editor, saying, “For my 21st birthday, I got myself my first copy of Final Cut Pro.” But for Don Jon, he handed the keys to the edit booth over to Lauren Zuckerman (Bee Season, The Deep End).

“Editing is a very particular process,” he explained, “and I felt it would be wise to have some feedback in there.” The result is a mixture of their styles. “She’s great at graceful, subtle, traditional scenes, whereas most of the editing I’ve done is not traditional like that. It’s more little short films and videos.”

The same goes for sex. “You don’t really see sex anywhere but pornography, and no one’s talking about it, so that’s what he expects sex to be.”

This article was originally published by the Austin Chronicle.