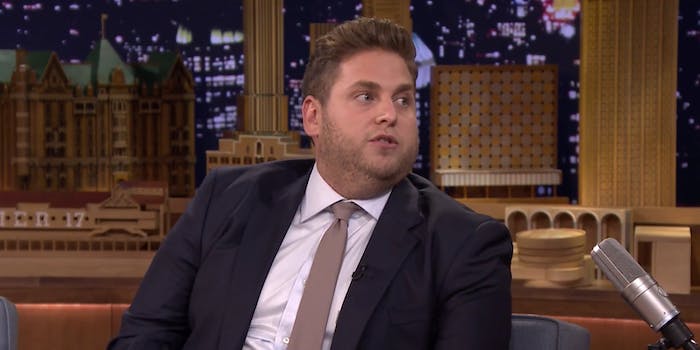 Jonah Hill gave an emotional apology on The Tonight Show after getting into trouble for calling a paparazzi photographer a homophobic slur during the weekend.

Hill was on the show to promote 22 Jump Street, and instead of launching straight into a funny bit (or one of Jimmy Fallon’s many games), he started things on a serious note. He explained that he said “the most hurtful word I could think of at that moment” after a paparazzi photographer verbally insulted him and his family while he was out over the weekend.

“I didn’t mean this in the sense of the word, I didn’t mean it in a homophobic way,” he said while Fallon listened. “And I think that doesn’t matter, how you mean things doesn’t matter. Words have weight and meaning. The word I chose was grotesque and no one deserves to say or hear words like that.”

As a lifelong supporter of the LGBTQ community, he felt that he had let everyone down and offered his apologies, even if people didn’t want to forgive him for it.

“I know I’m usually funny and shit, but this wasn’t funny,” he said. “It was stupid, and I deserve the shit I’m going to get for it.”

Hill already owned up to saying the slurs earlier that day on The Howard Stern Show, but with Fallon’s audience size and the tendency for his clips to go viral, he was able to reach a bigger audience. With his press tour in full swing, this might not be the last time he apologizes for using the slurs.