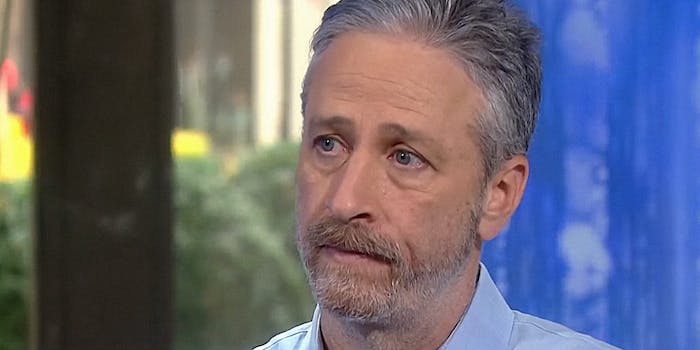 'Comedy on its best day is not a great environment for women.'

C.K. was supposed to perform as part of HBO’s Night of Too Many Stars this weekend, a special aiming to raise money for Next for Autism, but he was quickly removed from the all-star comedic lineup. And Stewart, who is hosting Night of Too Many Stars, was asked for his reaction to C.K. during an interview on Today promoting the benefit.

Stewart described his initial reaction as “stunned,” explaining that he tends to give his friends the benefit of the doubt. But he also addressed the underlying issues within the comedy world that have always existed.

“You feel anger at what he did to people,” he said. “Look, comedy on its best day is not a great environment for women. I think it’s gotten better over the years, but certainly when we started 30 years ago, it was really difficult. So to do it was an act of bravery in and of itself. The idea that there was this added layer of pressure and manipulation, and fear and humiliation—and not just—look, I don’t want to make this like, ‘Louis was the only one in the business!’ It’s not. It’s endemic.”

Last year, a clip of Stewart on David Axelrod’s podcast went viral after someone asked Stewart about rumors of C.K.’s sexual misconduct. Stewart was dismissive of it at the time, but now he’s saying that instance was the first time he had heard about it and acknowledged that he didn’t take some of the issues in comedy seriously enough.

“A year ago, I was doing a podcast with David Axelrod and a man in the audience asked me about it,” Stewart said. “I hadn’t heard, at that point, of any of it. He said, ‘What do you think of the allegations against Louis C.K., and my first response was, ‘What?’ and then joke, joke. And as he kept going, I was, ‘Look, I know this is very serious. I know Louie. He’s always been a gentleman’—to me, which, again, speaks to the blindness a man has.”