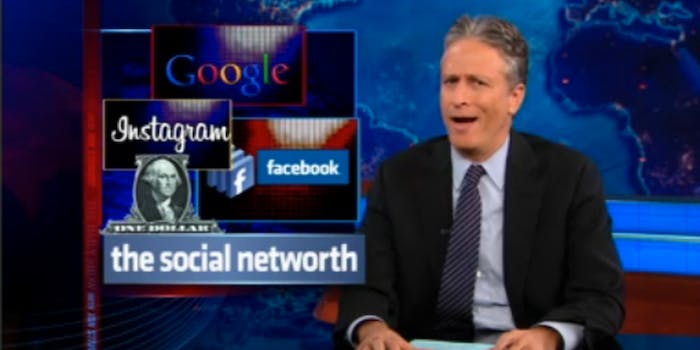 “A billion dollars of... money? Stewart asked on The Daily Show. "For a thing that kind of ruins your pictures?”

Being a crotchety, old man, Jon Stewart is totally confused by Facebook’s purchase of Instagram. Apparently, he doesn’t even know what the application does.

After a brief primer about Instagram clipped from an ABC News report, The Daily Show host mocked, “Wow, that’s really…lame.” What threw Stewart off even more was the purchase price: $1 billion.

“A billion dollars of… money? For a thing that kind of ruins your pictures?” Stewart asked on Tuesday night’s show. “The only Instagram worth a billion dollars would be an app that instantly gets you a gram, of uncut Colombian, black coffee.”

Acknowledging that technology stories will never make sense to him, he brought in Senior Youth Correspondent Jessica Williams, who broke it down for the elder statesman.

Williams said the billion-dollar price tag is perfectly reasonable because “it’s awesome” since we don’t have to build a time machine to make it look like our pictures are from the 1960s.

Watch below as Williams explains Instagram to Stewart and look for the bonus Ryan Gosling appearance.