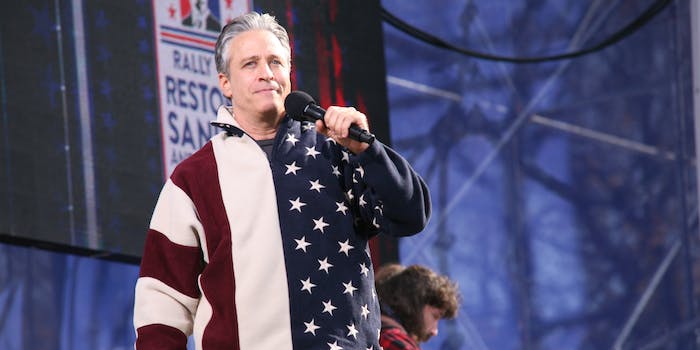 7 great moments in the history of ‘The Daily Show’

Quite a lot has happened on his show in the past 17 years.

Jon Stewart is going to be a tough act to follow.

The longtime host of The Daily Show announced his departure on Tuesday’s show, and he’s already being commemorated online for 17 years of satirizing the news. Over the years he’s managed to make an audience that might not watch regular news care about it. We’re still waiting to hear word of when Stewart’s last show will air, and many are already trying to predict or cast his replacement.

He’s done a lot in his tenure, and considering the Daily Show‘s online archives are a treasure trove of snapshots and moments from his career, you could easily lose an afternoon or two diving down the rabbit hole of old clips. It’ll be months before we watch Stewart’s swan song—his contract is up in September, but negotiations of when he’ll officially step down are ongoing—but people are already mentally preparing for the end.

Here, we’ve gathered some of Stewart’s best work to get you started on your Daily Show binge-watching.

To put things in perspective, when Stewart first took over The Daily Show from previous host Craig Kilborn, much of his audience today was still in grade school. A much younger Stewart tried to dispel the fear that the Daily Show people had already come to love was going to change for the worst once he sat down behind that desk. He didn’t want to be the audience’s father; he just wanted to sleep with their mother, a.k.a. The Daily Show.

“And I know change can be painful, but from change comes growth,” he said, which seems rather fitting for his retirement. “The moment for us is gone.”

Like many hosts on the late-night circuit, Stewart was in the tough position of addressing the events of Sept. 11 on his first show after the attacks on Sept. 20. He largely skipped the comedy and went with a simple question for his audience and the viewers: “Are you OK?”

Seeing him process his feelings on the air in a subdued manner would be something he’d do a few more times in his run on the show, and the somber tone showed another side of him. Yes, he’s a comedian who makes fun of the news, but he is also human just like everyone else.

Stewart originally went on Crossfire, a debate show on CNN, on Oct. 15, 2004, to promote his book America (The Book): A Citizen’s Guide to Democracy Inaction. He quickly turned the tables on hosts Paul Begala and Tucker Carlson and grilled them instead. He accused the hosts of “hurting America” by “encouraging divisiveness” and said that he made an effort to come on the show and tell them that.

Carlson was stunned and could only ask him, “Aren’t you supposed to be funny?”

CNN President Jonathan Klein cited Stewart’s appearance and criticism when Crossfire got canceled a year later and said that he “agree[s] wholeheartedly with Jon Stewart’s overall premise.” CNN tried to bring back the show years later, but the revival was canceled in October—fittingly on the 10th anniversary of Stewart’s original Crossfire appearance.

4) Anything with Stephen Colbert

From Daily Show correspondent to fellow host and rival, the Jon Stewart/Stephen Colbert friendship has spanned years (Stewart even produced The Colbert Report) and yielded plenty of great moments; their on-screen rapport is second-to-none.

Out of their greatest hits (among them fighting over who was the biggest Star Wars fan), we somehow narrowed it down to two: a classic bit in which Colbert breaks character while covering a Prince Charles scandal, plus a more recent wild goose chase when Stewart stole Colbert’s Super PAC.

5) His friendship with Bassem Youssef

After years on the air, Stewart became a big enough name that he was frequently used to describe other satirists who did work similar to his. Among the most notable is Bassem Youssef, who was called the “Egyptian Jon Stewart.”

Originally a heart surgeon, Youssef made YouTube videos around the time of the Egyptian Revolution and soon started to host Al Bernameg (“The Program”) on Egyptian television. He’s been criticized and arrested for his comments on the air, which has mocked Egyptian officials. Although Youssef is unable to continue his show due to threats from the government, Stewart has always shown him his support.

Stewart has appeared on Al Bernameg, and Youssef has gone on The Daily Show multiple times. His most recent appearance was Monday night as the show’s new Middle East Contributor.

6) Anything with Tracy Morgan

He’s had many notable guests on over the years, from both the entertainment and political fields, but Tracy Morgan was consistently funny and always had something to say, leading Stewart to invite him back over and over again.

7) Breaking the Internet with a #ThrowbackThursday

Just last week, Stewart and The Daily Show sought to “break the Internet” by reposting a “Moment of Zen” from 2001 on the show’s Instagram account featuring him, Colbert, and former correspondent Steve Carell. Not all of us could appreciate it then, but we can now—and boy did we.