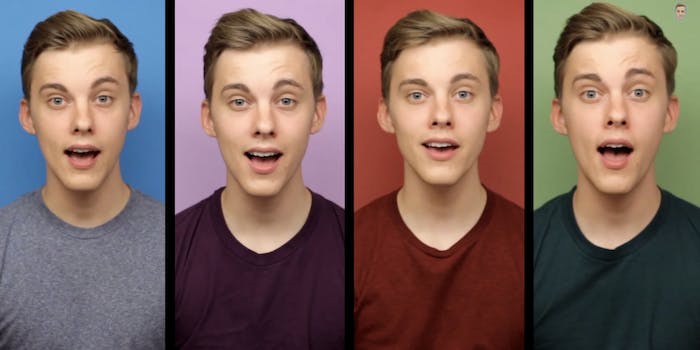 Either Billboard isn’t tracking the "2" in his title correctly or release of the new song has lead to an uptick in listeners giving the original a spin.

Within hours of the release of Jon Cozart’s new video, “After Ever After 2,” the track has not only racked up praise and views from his more than 1 million YouTube fans, it’s also achieved a nascent honor—topping the new Billboard Trending 140 Chart, which tracks songs shared in real time on Twitter.

Since launching the Trending 140 the end of May, the chart has been dominated by stalwart social media musical darlings (and mainstream powerhouses) like Justin Bieber, Katy Perry, and Lana Del Rey. Songs are included in the chart through a variety of factors—including links to platforms such as Spotify, Vevo, and iTunes; hashtags #nowplaying or #np with the song/artist name; or terms like “music,” “track,” or “listen” tweeted along with the song title. Cozart’s new track has been getting voracious love from his fans and fellow YouTubers all day on Twitter.

AFTER EVER AFTER PART 2!!! @JonCozart is SO TALENTED!! AHHHH! I DIED! AND CAME BACK TO LIFE TO WATCH AGAIN! https://t.co/Fyjxmd8hxE

@JonCozart OH MY GOSH YOUR NEW VIDEO SLAY ME. You’ve been my YouTube crush for years, please love me.

Interestingly, Cozart’s appearance on the chart is for “After Ever After,” the original Disney parody that he released in March 2013. Either Billboard isn’t tracking the “2” in his title correctly or release of the new song has lead to an uptick in listeners giving the original a spin and winning it a chart position; Billboard hasn’t respond to a request for comment on the matter. But either way, Cozart’s current social media musical dominance is evident.

Let’s welcome @JonCozart‘s “After Ever After” to the top of the Trending 140 pres. by @McDonalds https://t.co/S0GjD1ZxOY

Cozart rocketed to virtual overnight success in 2013 when the Austin college student released a Harry Potter parody that earned him millions of views and over a million subscribers to his Paint channel. The most recent video chronicles what happens to Disney heroines like Mulan, Tiana, and Cinderella after their stories end. Cozart is sporadic with his video updates—his account spans four years but only hosts 18 videos—building in a bigger hype for his releases that could account for the chart bump. Whatever the formula, the one-man barbershop quartet is getting attention beyond the confines of YouTube with his work. Could we see an all-YouTube music chart in the future?