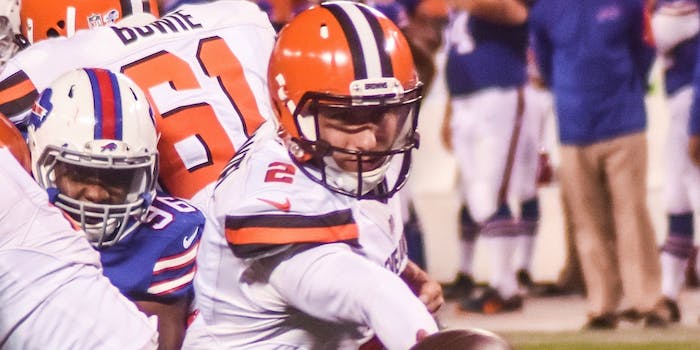 Did Johnny Manziel wear a disguise in Las Vegas? The Internet might have proof

Browns quarterback Johnny Manziel didn’t show up for Cleveland’s game Sunday, because, reportedly, he was partying in Las Vegas. Manziel wouldn’t have played anyway since he was still in the league’s concussion protocol, but he was expected to be at team headquarters last weekend and when he wasn’t, the Browns couldn’t find him.

Perhaps nobody could find him, because Manziel was in disguise.

According to USA Today, Manziel was dining and gambling at the Planet Hollywood casino on Saturday night, the day before Cleveland’s season finale. At one point, he apparently tried to get a meal comped so he wouldn’t have to pay with his credit card. But the reason a photo of Manziel in Las Vegas hasn’t emerged is because he apparently was wearing “a blonde wig, a fake mustache, glasses, and a hoodie.” Oh, and he reportedly was introducing himself as “Billy.”

Once the news emerged, Manziel Instagrammed this photo with the #SaturdayNights hashtag and geotagged himself as being in Avon, Ohio.

But the Internet isn’t buying it. So far, nobody seems to know for sure if Manziel was in Las Vegas wearing a disguise, but the Internet is having plenty of fun at Manziel’s expense anyway.

You can even buy a shirt of what Manziel might look like with blonde hair and a big ol’ manly mustache. 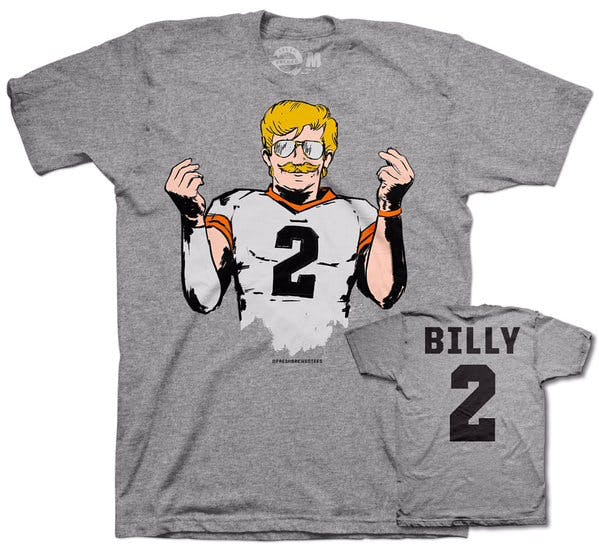 Not surprisingly, Manziel, a first-round pick in 2014 who has been a spectacular disappointment in his pro career (mostly because of his perpetual off-the-field shenanigans), probably won’t be employed by the Browns heading into the 2016 season. There have been rumblings that Manziel could end up in Dallas, but at this moment, whether this Las Vegas disguise story is true, the career of the most interesting player to write about for the past few years is in peril.

And when that day comes and his career if finished, it’ll be a sad one for all the Photoshoppers of the world who live to entertain and sprinkle snark wherever they go. But we can take solace in this: While the Johnny Manziels of the world might come and go, the Billy Manziels stay in our hearts forever.