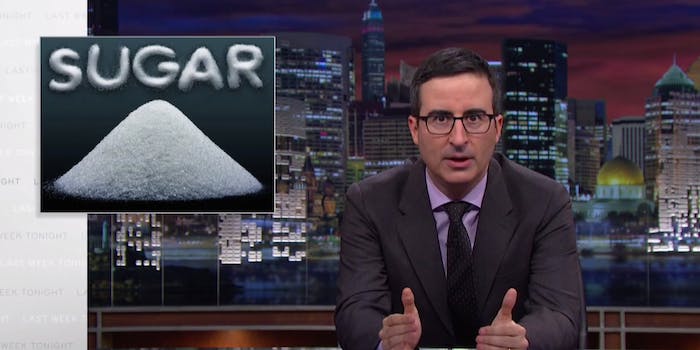 John Oliver is about to kill your Halloween sugar high

Halloween is just around the corner, so who better to make you feel guilty about consuming massive amounts of candy than John Oliver?

The average citizen is consuming too much sugar—sometimes up to 22 teaspoons daily—and while that’s bad for our health in the long run, you won’t hear about it from Big Sugar. In fact, thanks to how companies label food, you probably don’t know how much sugar you’re actually consuming.

The FDA is trying to change that by requiring food and beverage companies label their products with how much sugar is added. Those companies are actively trying to fight this proposal, and if they can’t stop it, they want to be allowed to list the information in grams, not teaspoons. Even the companies that manufacture products with cranberries, something Oliver says has sugar added to it to make it edible, don’t want to disclose that information.

“We are proposing, in the spirit of Halloween, that product manufacturers express their sugar content in the form of candy,” Oliver said. “Specifically, circus peanuts, the most disgusting of all the candies. They taste like an elephant ejaculated into a packet of Splenda.”