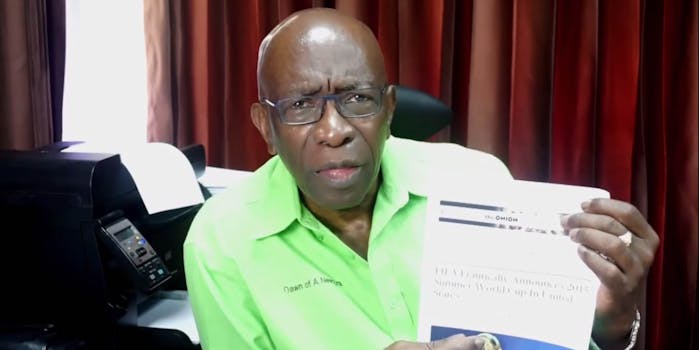 Memo to Jack Warner: it's not wise to enter a war of words with a comedian.

John Oliver has been gleeful lately about the resignation of FIFA president Sepp Blatter—so gleeful, in fact, that the Last Week Tonight host bought airtime on Trinidad TV to start a hilarious feud with former FIFA executive Jack Warner, who was arrested during a police sting at a Swiss hotel earlier this month and tried to defend himself by citing an article in the Onion.

Now, Warner has responded to Oliver’s response on TV 6 CCN. He’s outraged that Oliver, a foreigner and a “comedian fool,” would be allowed to buy time on the local TV station to ridicule him and his community.

We have to ask: What is up with that background music? It’s awesome and completely inappropriate. At times it’s hard to hear Warner because the soaring music is so dramatically loud.