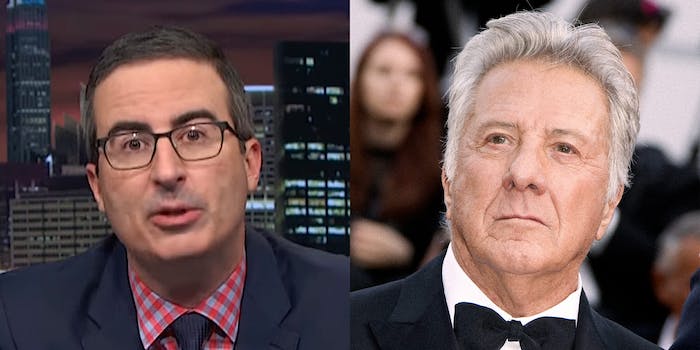 'All hell has now broken loose on this Wag The Dog panel.'

John Oliver held no punches during a panel for the 20th anniversary of Wag the Dog with actor Dustin Hoffman Monday night.

The event took place at Manhattan’s 92nd Street Y, where Hoffman was joined by Robert De Niro, producer Jane Rosenthal, and director Barry Levinson to ostensibly talk about the political satire they made together in 1997. The movie is about an American president who finds himself in the middle of a sex scandal and ends up trying to use showbusiness tactics to distract the public from his bad press so that he can be reelected. Since an account of Hoffman groping a then-17-year-old woman on the set of the 1985 TV movie Death of a Salesman just surfaced in November, and he released a public apology shortly afterward, panel moderator Oliver drew a connection between the movie and the current cultural shift happening in the entertainment industry.

“This is something we’re going to have to talk about because … it’s hanging in the air,” Oliver said.

“It’s hanging in the air?” Hoffman replied. “From a few things you’ve read you’ve made an incredible assumption about me.” Then he sarcastically noted, “You’ve made the case better than anyone else can. I’m guilty.”

After that, it was off to the races. Both the questions and answers grew exceedingly spicy as the panel wore on. Hoffman maintained that his actions do not reflect his character throughout the discussion.

“You’ve put me on display here,” Hoffman reportedly said. “You have indicted me…That’s not innocent until proven guilty.”

At one point he reminded Oliver, “You weren’t there” when the reported harassment took place, to which the Last Week Tonight host responded, “I’m glad.”

Deadline reports that the audience “became increasingly vocal and divided as the almost 30-minute debate continued.”

Washington Post writer Steven Zeitchik livetweeted the conversation, and perhaps described the evening most succinctly by tweeting: “All hell has now broken loose on this Wag The Dog panel.”