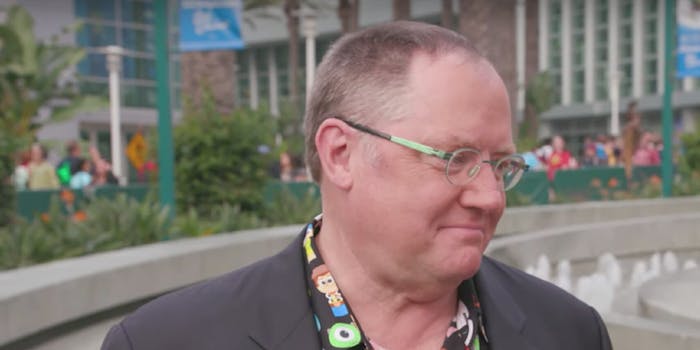 Screengrab via Oh My Disney/YouTube

Pixar chief taking leave of absence due to ‘missteps’ with employees

John Lasseter had a reputation for 'grabbing' and 'kissing' people.

John Lasseter, Walt Disney Animation Studios chief and Pixar co-founder, is taking a six-month leave of absence from Pixar following what he said were “missteps” with employees.

Lasseter announced in a memo to employees Tuesday that he would take a break to “recharge and be inspired, and ultimately return with the insight and perspective” he needs to be a leader.

The statement came just before the Hollywood Reporter was poised to report that a Pixar employee said Lasseter had a reputation for “grabbing, kissing, making comments about physical attributes.”

As one of the founders of Pixar, Lasseter has played a prominent role in the success of the animation film studio. He was involved in the making of Toy Story, Cars, Moana, The Incredibles, Up, and other popular films.

Lasseter has been with Disney for more than three decades and took over the animation studio in 2006. He has been awarded dozens of honors, including two Oscars and a couple of Emmys.

The Reporter published in full Lasseter’s memo to his employees.

“I have always wanted our animation studios to be places where creators can explore their vision with the support and collaboration of other gifted animators and storytellings… It’s built on trust and respect, and it becomes fragile if any members of the team don’t feel valued,” Lasseter said. “As a leader, it’s my responsibility to ensure that doesn’t happen; and I now believe I have been failing short in this regard.”

Lasseter went on to say that he has recently had a number of “painful” conversations.

“I especially want to apologize to anyone who has ever been on the receiving end of an unwanted hug or any other gesture they felt crossed the line in any way, shape or form,” he said.

Lasseter reportedly made an unwanted advance that caused Toy Story 4 actress and writer Rashida Jones and her writing partner Will McCormack to leave the film early.

Pixar sources told the Reporter that this was not an isolated incident. The sources said Lasseter is also known for heavily drinking at company events and other social settings.

In 2011, the Wall Street Journal published a story titled “Arms and the Man” with photos of Lasseter doling out hugs to dozens of people.

Neither Disney Pixar nor the Walt Disney Company has released a statement regarding Lasseter’s leave.