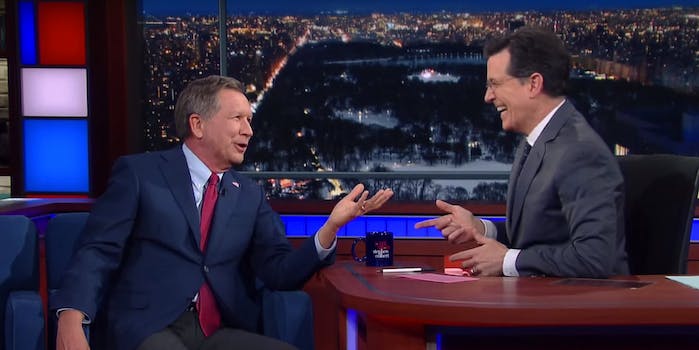 The Ohio governor is sick and tired of the negativity.

There have been nine GOP debates to date (with at least two more planned in the next month), and John Kasich is just as sick of them as everyone else.

Appearing on The Late Show, the Ohio governor—fresh off his surprise second-place finish in New Hampshire—called them “the dumbest thing going.” They way they’re set up, he said, candidates had to explain their life story in 30-second soundbites. And that’s not even factoring in the negativity and ugliness surrounding the Republican race.

“How are you going to elect a president on the basis of a clever soundbite, particularly if the soundbite is designed to attack somebody else?” Kasich asked. “If I can’t win by being fundamentally positive, what’s the point of winning?”

Having already asked Donald Trump, Colbert turned to Kasich on the Supreme Court question. It was here that he stumbled. He said he’d pick a replacement for Justice Antonin Scalia and would want the pick to be a major consensus, something he said President Obama couldn’t do given current politics—but in the same breath, he said that the next pick should wait until after the election, so the American people could have their say.

But as Colbert pointed out, they already had their say—when they re-elected Obama in 2012.