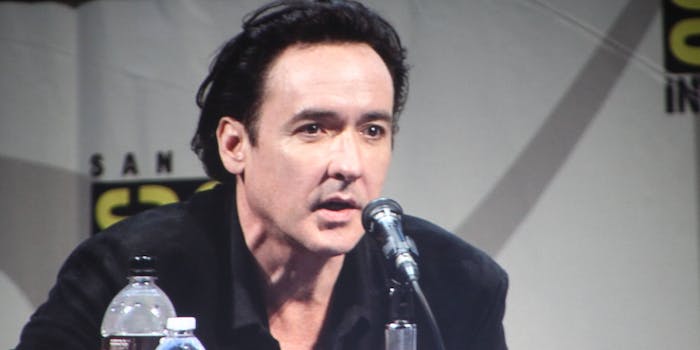 At this rate, it's only a matter of time before NBC shelves the project.

Yesterday, news broke that NBC had closed a deal for a script commitment for a Say Anything TV series. The show would be the result of a partnership between NBC and 20th Century Fox TV, with Aaron Kaplan (the U.S. remake of The Inbetweeners, Terra Nova) executive producing and Justin Adler (Better Off Ted) writing. The show would pick up the original story 10 years later, after Diane Court, who has dumped Lloyd Dobler, returns home and Dobler attempts to win her heart again.

“Would” is the key word in that last sentence, as the project is likely scarred beyond repair at this point after writer/director of the 1989 film, Cameron Crowe, took to Twitter in response to the news:

Regarding the announcement of a “Say Anything” tv show… @JohnCusack, @IoneSkye1 and I have no involvement… except in trying to stop it.

John Cusack, who played Lloyd Dobler in the film, also used the medium to express his feelings on the project:

No end to the exploitation of other people’s sincere efforts in shameless slime “@auntyK007: @CameronCrowe No imagination for new ideas”

According to Deadline, 20th Century Fox TV attempted to reach out to Crowe prior to the announcement, but a bungling in communication resulted in him discovering the deal at the same time as the rest of the Internet. Seeing as how we live in the age of Skype, Yo, and a half dozen standalone Facebook apps, it seems like it’d have been prudent for 20th Century to have attempted a few more calls or texts before closing a deal to script the series; it’s not smart to squarely slap in the face the person whose public opinion could scare NBC away from the deal entirely, which is likely what will happen here.

Crowe is currently executive producing, along with J.J. Abrams, a pilot for a series titled Roadies for Showtime, which he also wrote and is directing. With Crowe dabbling in the arena of television, it would be incredibly unwise for NBC to move forward with something he considers an insult. It certainly can, if it wants to, as 20th Century TV owns the rights to the Say Anything name and property and can legally do whatever it wants with it, but it all boils down to one question: Does NBC want to air a show that uses the Say Anything name to attract viewers, or would it be better to keep the possibility open, in the future, of developing something with Cameron Crowe and attracting viewers with that name instead? With fans of the film foaming at the mouth over the possibility of a TV show happening without its original talent involved, it doesn’t seem like too promising of a project to alienate Crowe over.

It probably won’t be long before NBC announces the project has been shelved, and the world will be spared from the blasphemy of a recast John Cusack, Ione Skye, and John Mahoney (whose James Court, a white-collar criminal, would certainly be long out of prison by this point in the timeline).

H/T Uproxx via Deadline | Photo via Keith McDuffee/Flickr (CC BY 2.0)