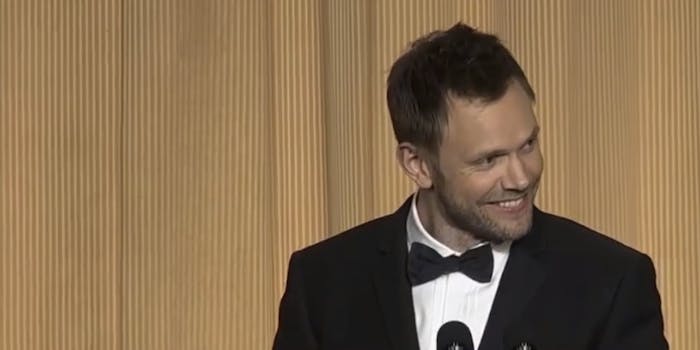 The toughest gig in comedy always makes for uncomfortable laughs.

The annual White House Correspondents’ Association dinner is, in many ways, a deeply unfortunate tradition. Nominally intended as an opportunity to cut through the double talk and false equivalency that characterize Washington and the toothless media that covers it, the occasion more often reinforces the idea that politicians, journalists, and entertainers form an unholy axis of self-serving, self-perpetuated narcissism and complacency.

Still, there’s always the pleasure of watching a painfully awkward keynote by that year’s comedian host—in this case, Joel McHale of Community and The Soup. As with so many of his predecessors’ speeches, the jokes are on point but often land badly, thanks to an audience that has long made a point of withholding laughter (or emitting a scandalized “Ohhh”) when it feels a line has been crossed. Which happens fairly often, this being a roast by design.

Turning Obama’s failure to close the Guantanamo Bay detention center into an opening punchline? A little nauseating but certainly bold. Meanwhile, the image of Joe Biden “elbow-deep in jalepeño poppers” at the Applebee’s in Dulles Airport, “talking to a construction cone he thinks is John Boehner,” is rather inspired. The real highlight, of course, is watching Wolf Blitzer react with all the aplomb of a wax sculpture to a savage takedown of CNN.

Don’t take it so hard, Blitzy. At least you don’t have to call Chris Christie fat for a living.

Photo via The Daily Conversation/YouTube