Joe Rogan killed a bear with a bow, and the Internet isn’t happy

"Why man? What a shame. To waste an animal like that for nothing?"

Usually, the attack comes before you kill the bear. In comedian Joe Rogan’s case, however, it came afterward—from scores of animal-loving Internet users.

On June 8, Rogan proudly boasted about his slaughter of a black bear while hunting in Canada with Joe Rogan Experience podcast cohost Cameron Hanes. His only weapon was a bow. 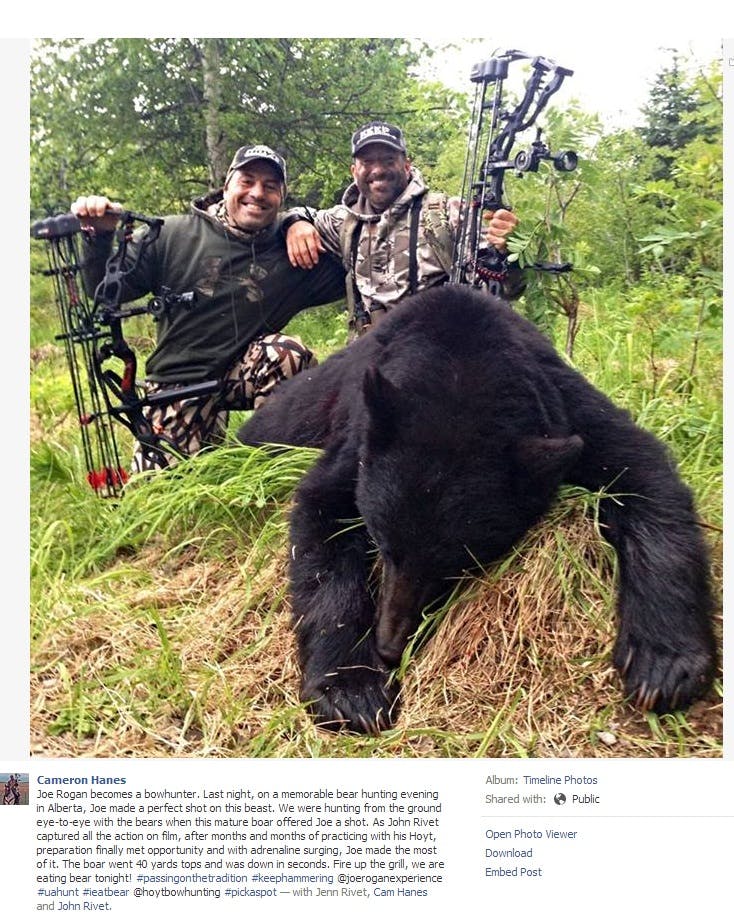 Anyone that tells you bear meat isn’t delicious doesn’t know what the fuck they’re talking about. https://t.co/WW9rksBKIp

@joerogan Shame on you for killing innocent animals. #Idiot

“Why man? What a shame. To waste an animal like that for nothing?” redditor bantamfly said.

Others, however, saw nothing wrong with Rogan’s furry prize.

A friend is furious about joe rogan killing a bear, eating it and thinks hunting is disgusting. He is telling me this while eating a steak.

“Why are there so many anti hunters following a staunchly pro hunting guy?? That’s what it pitiful sad and stupid. Saw joe Rogan shoot his 1st deer with Steve rinilla on meat esters. He’s a great addition to the hunt community. Way to pass on the tradition cam. You are the man,” Facebook user Tom Kirklin said.

“I don’t know what’s so controversial here. I don’t oppose trophy hunting, but that’s not even what’s going on here. In fact Joe does this in part because he opposes factory farming,” redditor celerycelerity said.

Despite the criticism, there are no legal problems with Rogan’s choice of game—in fact, quite the opposite is true. It is currently hunting season in Canada, and area hunters are counted upon to help control the black bear population.

Nevertheless, Rogan’s experience is not without precedent. In November 2013, reality TV star Melissa Bachman suffered similar Internet backlash after posting pictures of a dead lion she hunted in South Africa.