MysteryGuitarMan tackles time travel and immortality in his new project.

Half of an airplane is full of extras dressed in ’60s attire, miming their way through a flight as the camera focuses on two individuals, a nervous woman and a suspicious looking man, engaging in a conversation. Joe Penna, also known as MysteryGuitarMan on YouTube, sits in the director’s chair, intermittently pressing a switch that signals a line of crew members to create turbulence on the airplane using large pieces of wood. Penna might be having too much fun with this newfound power, but it is his story and his chance to shine with Beyond, a new short film that explores time travel and immortality, shot on location at YouTube Space L.A.

“We were going to rent the plane out ourselves,” Penna says, “but we mentioned it to someone at YouTube Space and they were like, ‘Oh, that’s something we’ve been trying to do! Get a plane!’ So, if we set up the context, they were willing to do the research. We were the ones who were able to pick the plane. For example, we didn’t need a cockpit, but we needed a bathroom. They were gracious enough to let us be the first ones to use it.”

All of the interiors for the film were shot at the YouTube Space, minus one shot at Penna’s own home.

“It’s been tough,” Penna said. “Especially with the budget that we have. We had basically 12 entire sets that we had to design and build from scratch here in the Space. Plus we had a bunch of location shoots. It’s a time-travel thing. It’s an immortality thing. So it’s important that we show all these eras. The ’50s, the ’60s, the ’70s… the 500s! We found a couple locations, but if we couldn’t find them, we had to build them.”

Suffice it to say, Beyond is definitely science fiction, even if the airplane set feels very real-world. The short follows the journey of an immortal man as he travels through time, from as far back as A.D. 500. Time travel and immortality are topics of particular interest to Penna, who is both writer and director on the project. 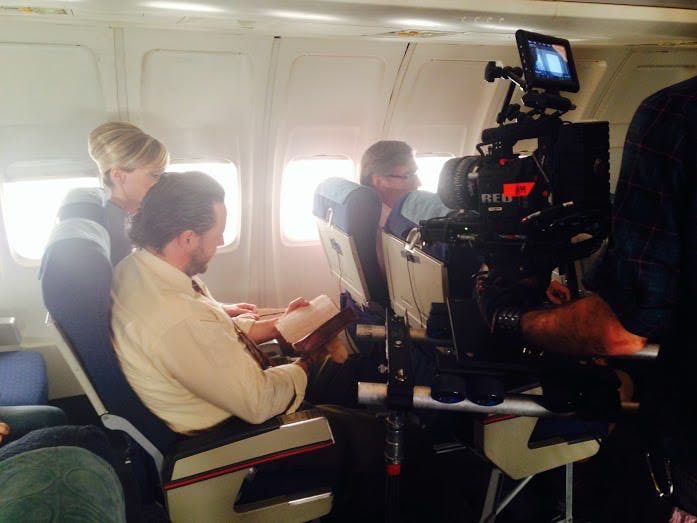 “People see vampires as these sexy beings, but if you think about what a vampire’s life would be like, everyone would be dying around them,” he explained. “They can’t sustain meaningful relationships and would probably become very anti-people for long periods of time. You could ask them, ‘What did you do for the last 10 years?’ and they could say, ‘Stayed in bed.’ At least that’s how I feel. I wanted to get a little more ground and explore those ideas of time travel and immortality.”

This is not Penna’s first time at the short film rodeo. His last ambitious short film project, Instant Getaway, imagined a futuristic setting where goods and people could be teleported across space—and the consequences that could arise when the wrong things end up making the journey.

“Instant Getaway was interesting because we had half the time to shoot it, and a much lower budget,” Penna explained. “We were getting the cheapest locations we could find, and there were a lot of creative concessions we had to make. It’s been interesting trying to still get enough footage to convey the emotion that I want to convey or the right coverage or do enough rehearsals; that’s the biggest challenge.”

The end result is a slightly longer production than Instant Getaway, but not by much. That allowed Penna to spend more time and money on getting exactly what he wanted out of it. The increased budget allowed the team to keep the family of creators that helped on Instant Getaway stay on for Beyond—at higher rates. Penna also relies on the power of his 2.8 million-strong fanbase to help him achieve his goals, asking them to help him complete tasks that save him time or money and foster a connectivity between creator and viewer.

“For example … I asked my fans who speak French to do a French translation and then had people vote on which one is the best,” he said. “I always send out my scripts before to my fans to see what they think. I send out my rough cuts sometimes to the superfans and get some anonymous responses back. Doing that kind of thing is good; I can take them into account if I want them to. I feel like a lot of my fans are filmmakers or interested in the craft.”

Fans have reacted in new ways to Penna’s short film work, as opposed to his other YouTube fare.

“In the end, with Instant Getaway, people were saying they are connecting with the characters,” Penna explained. “That’s not the kind of reaction I get with my poppy visual effects kind of stuff. At the end of the day, it’s about connecting with your fans. The way I do that with my YouTube channel is by shooting whatever is in my head and giving it to them. I’ve done videos with product integration before, and had viewers say, ‘That doesn’t really feel like you.’ There’s just so much creative freedom. My channel’s up there and I can self-finance these projects. For me, that’s even better than going theatrical and going through a focus group.” Just because Penna is becoming a master of the YouTube craft, doesn’t mean he’ll be abandoning the digital space for the multiplexes any time soon.

“I think that, for me, what’s nice about the digital space is that you can dictate the length of things you want to do,” Penna said. “I don’t have to make a show that’s 20 minutes long, and I don’t have to edit for time. I’m not hindered by constraints. Look at House of Cards, a couple episodes were 53 minutes, a couple episodes were 44. Who cares? Just tell a good story. YouTube is the best way to do that. I’d love to do a feature film that goes up on YouTube or somewhere else in the digital space. If that’s not possible, then I’ll leave it up to the suits to figure out. I like to figure out what’s the best for each story.”

For Penna, everything is practice. His MysteryGuitarMan videos prepared him for short films, which he says he sees as practice for longer, feature films. That, he says, might in turn be practice for something bigger, although he doesn’t have a particular end goal in site. He is, however, finding news ways to use the digital medium to tell his story. For Beyond, that means easter eggs hidden within the video that send viewers off on more immersive experiences.

“We’re going to be hiding annotations all over the video that, when they find these hidden annotations they can go to the digital graphic novel where it expands on the story, some things that were too expensive to shoot,” Penna explained.