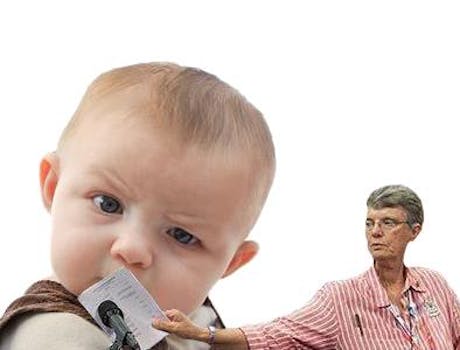 Anti-Romney Republicans rally behind the original picture, but anyone can appreciate the freedom of speech message.

The latest Internet Photoshop meme spent over two months simmering as an in-joke among anti-Romney Republicans before erupting into full-fledged memehood just after the presidential election: a photograph of former Romney delegate Joan Clendenin of Modesto, Calif., at the Republican National Convention last August has been pasted into countless iconic images as “Joan the Silencer,” and the Facebook page of that name has collected more than 1,900 likes in the three days since it started.

The meme is similar to the one created last year after Officer John Pike was photographed pepper-spraying peaceful student protesters at a campus sit-in. Difference is, instead of repeated images of a man spraying famous icons of art and history, it’s a woman holding a sheaf of papers at arm’s length in a hamfisted attempt to silence them.

The original photograph shows Clendenin holding a handful of papers over a microphone in an attempt to prevent 36-year-old Jeremy Blosser, a Ron Paul alternate delegate from Fort Worth, Texas, from speaking into it. But the photograph got little attention until after the presidential election, on Nov. 8, when Michael Nystrom from the Daily Paul blog posted it with the headline “Help me caption this RNC 2012 photo.”

Most chose to Photoshop it instead, and by the next day there were enough variants that some friends of Blosser’s could start their Joan the Silencer Facebook page.

“The microphone wasn’t even turned on, but Joan didn’t know that,” Blosser said in a phone interview with the Daily Dot. He’s a little bemused to find himself, months after the convention, near Ground Zero of an online meme. When the actual photo was taken, Blosser said, “I had no idea [Clenendin] was there.”

The backstory is complicated; Blosser himself said, “[I]t’s an obscure issue, the rules and minutiae of the convention.” But the gist of it is, many grassroots Republicans complained about rule changes imposed at the last convention, changes which Blosser called it “a power grab by Romney’s campaign attorneys on the rules committee … There was no debate. It wasn’t a convention; it was a pageant. A farce.” (After the convention, one TV pundit on a Fox affiliate decried the rule changes at the convention and wondered if a “Republican civil war” wasn’t brewing in the party ranks. Given the party’s dismal showing in the 2012 election, watch for this debate to resurface sometime before 2016.)

Blosser said he knew the microphone was turned off when he approached it. “I was at the mic calling ‘point of order.’ If they’d recognized me as they were supposed to, they would’ve turned the mic on.”

They did not, though Clendenin presumably didn’t realize that when she covered the mouthpiece with her paperwork.

Clendenin did not respond to the Dot’s request for an interview (although, given the peculiarities of Facebook’s messaging system, it’s possible she never saw it).

Blosser’s friend and fellow Texan Rob Hinojosa is another former Paul delegate. Hinojosa is one of the administrators of the Joan the Silencer Facebook page, and arguably the one who inadvertently started the meme in the first place, when he responded to the Daily Paul caption request with a picture showing Clendenin’s image photoshopped over Mel Gibson in Braveheart, giving the famous “They can never take our freedom!” quote.

Hinojosa posted his picture to his other Facebook page, “REVOLUTION Car Badges” (a reference to Ron Paul supporters, who referred to themselves in turn as the “Ron Paul Revolution”), with the caption “FREEDO – Excuse me, sir, can you keep it down?”

Yet neither he nor Blosser expected this off-the-cuff joke to take off as it did. “In our circles here in Texas, we’ve been having fun with that pic since day one, when we were still in Tampa [at the RNC convention],” Hinojosa told the Dot. “It wasn’t until it made its rounds on the Internet and … the Daily Paul put it on the front page and asked for captions that our collective minds produced the spin off.”

Correction: Jeremy Blosser does not serve as an admin for the Joan the Silencer Facebook page. He simply helped inspire it.

Photo via Joan the Silencer/Facebook