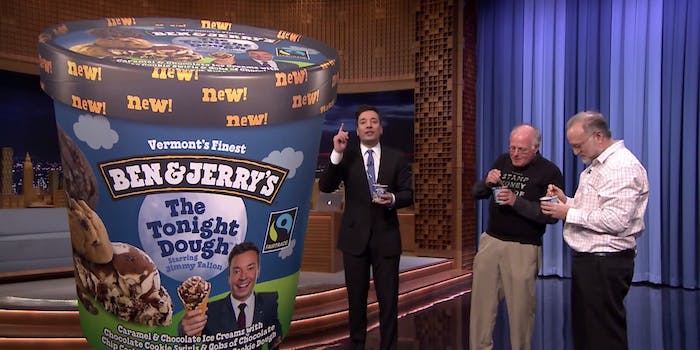 He definitely screams for ice cream.

The Tonight Show is about to get a whole lot sweeter.

Jimmy Fallon had the scoop on Tuesday’s show, revealing that he had teamed up with Ben & Jerry again for a new flavor. In honor of his first year on The Tonight Show, as well as being named Entertainer of the Year, Fallon and the ice-cream duo unveiled The Tonight Dough. Yes, really.

This ice cream seems to have everything: chocolate and caramel ice creams, two types of cookie dough, and a chocolate cookie swirl. Your teeth are already heading for the dentist’s chair—and it’ll probably be worth it.

All of the proceeds from sales of The Tonight Dough will go to charity, so you’ll be scooping out and digging in for a good cause.

If you’re now thinking about scrambling to buy Fallon’s last flavor, Late Night Snack, scramble no more and clutch onto what you have left. A Ben & Jerry’s spokesman confirmed last month that Late Night Snack had disappeared from shelves. It’s already melted off Ben & Jerry’s list of flavors.

“It was a [slow] phase-out,” the rep told Yahoo. “It is pretty unlikely that there is any left on shelves at this point.”

This is one of those times we really miss Stephen Colbert, since unlike last time, he and Fallon can’t have a scoop-off over their Ben & Jerry’s flavors.