Chairman of the Joint Chiefs of Staff/Flickr

Here’s your chance to puppeteer with the Jim Henson Company

This might be your only opportunity to make a Rainbow Connection.

Except at this very moment.

Because at this very moment, the Jim Henson Company—makers of such wonders as The Muppets, Sesame Street, and Bear in the Big Blue House—is inviting you to participate in an eight-week puppeteer training workshop. At this very moment, you have your chance.

Need the details? Of course you do. 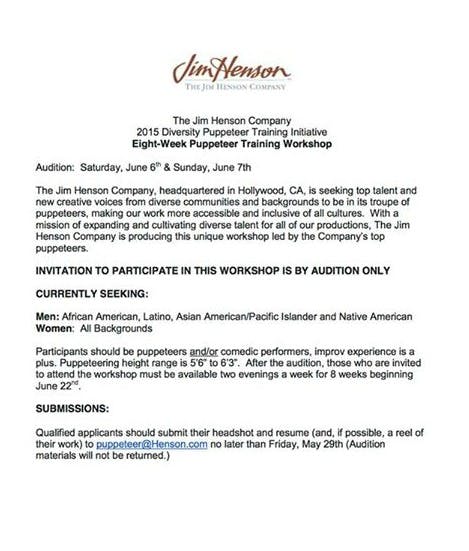 A couple of key points:

1) You can’t be too short (it’s not like Sesame Street needs you for Slimy the Worm), and you can’t be too tall (the role of Big Bird has already been taken by Caroll Spinney, who’s been playing Double-B and Oscar the Grouch since the beginning of the series).

2) If you’re a Caucasian male like me, you’re out of luck. Jim Henson’s people don’t want you (or me).

3) The letter says nothing about your prospects for being hired full-time once the eight-week apprenticeship is finished, but perhaps it’s not a coincidence that this opportunity has surfaced in the same week that it was announced that the Muppets will be returning to primetime TV this fall. Maybe it is a coincidence, but as of now, the Muppets have found more work.

But beware: Puppeteering isn’t quite as easy as just sticking your arm inside Kermit and pretending to make him sing “Rainbow Connection.” As Spinney noted in his recent AMA on Reddit, “Often, the puppeteer’s arm gets tired. Because the puppet has some weight. And also, besides the weight of the thing, is when you’re singing a song, and some words are said over and over (as songs can do)—your thumb gets tired, and can slow down! So it gets, sometimes I’ve had some songs where my thumb went dead on live television. So that wasn’t very comfortable. My thumb ceased to work!”

So, there you have it: If you love Jim Henson and you don’t care about your appendages actually working, this sounds like the perfect gig for you.

Besides, who wouldn’t want to join a group similar to this one?