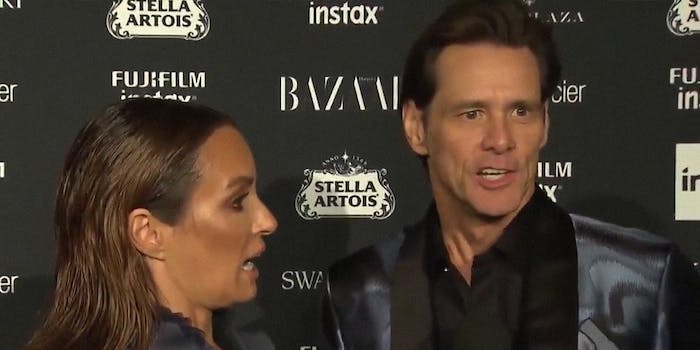 Jim Carrey goes deep in red carpet interview: ‘There’s no meaning to any of this’

Well, you certainly won't see this interview anywhere else.

Jim Carrey popped up on the red carpet for a Harper’s Bazaar party, an event for New York Fashion Week, and gave an E! reporter an earful about the meaning of life. Or rather the lack of meaning.

When Catt Sadler approached Carrey, it was ostensibly to get some red carpet soundbites about fashion or his next project, but Carrey had other ideas. “I wanted to find the most meaningless thing that I could come to and join, and here I am,” he said. “You’ve got to admit it’s completely meaningless.”

When Sadler presses him on the party’s “icons” theme, Carrey goes deeper: “Do you believe in icons? I believe in personalities. I don’t believe that you exist. But there is a wonderful fragrance in the air.”

Over the last few years, Carrey, executive producer of new Showtime series I’m Dying Up Here, has retreated from the spotlight and embraced a more spiritual existence, as appearances on Comedians in Cars Getting Coffee and Jimmy Kimmel Live illustrate. On the latter, he called Jim Carrey a “character,” adding, “I don’t think of that as me anymore.” In a 2014 commencement speech for the Maharishi University of Management, he advocated for being “present and fully connected.”

So perhaps that falls in line with his rejection of red carpet small talk, but he still tried to make it interesting. When Sadler mentions what he’s wearing, Carrey replies: “I didn’t get dressed up. There is no me.”